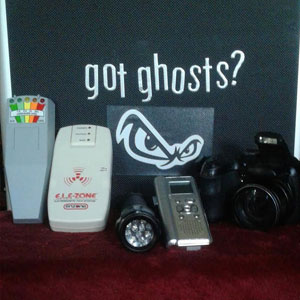 Don't fear a Ghost Hunt if you have the right equipment!

If I hadn’t discovered the paranormal over 30 years ago I would agree that the idea of ghost hunting could be terrifying. The places we investigate can be of two extremes no electric, heat, running water, and a port-a-potty or be completely modernized. The truth is ghost hunting happens in the dark with only a flashlight, recorder, and camera. Walking along a long dark hallway in a dilapidated building. Paint peeling off the wall and maybe one other team member with you, while other team members are off exploring. In essence, this is the reality of ghost hunting.
My Passion for Ghosts Started Young
My enthusiasm for the paranormal began at the age of 11 while hanging out at a friend’s house. It was here that I had my first, but not last, contact with a spirit (but that’s a story for another time). Until 5 years ago my method of ghost hunting was taking ghost tours, then returning to the location we visited to investigate. I’d use a digital recorder to ask questions and a camera to take pictures. I also traveled to different states and visited known paranormal locations. I began going to cemeteries to look at the eclectic head stones and communicate with spirits. Eventually I joined a local paranormal group and since then have investigated historical sites and private residences.
Location, Location, Location…
A good location is an important requirement for a ghost hunt. Locations can be historic sites, private residences, even outside locations like woods or a cemetery. Historic sites can charge an admission fee so be prepared and the amounts differ depending on the place.  The cost may include the freedom to roam around large multi-story buildings complete with basements, multiple staircases, and ambiance only found in a horror movie, minus the blood and gore. I was told after one investigation by the team member who reviews our video footage there were mice walking on pipes above our heads while in the basement. So glad I did not know that at the time, I hate mice!
Proper Equipment is Key to a Successful Ghost Hunt
The equipment you choose for ghost hunting is a personal choice. Some people use gadgets with all the lights and sounds, but they can be expensive. All you need for a basic hunt is a digital recorder, flashlight, and camera. In my earlier days I’d use a 35mm camera that required the film being sent out to get developed, today digital cameras offer instant gratification of knowing if you did or didn’t capture evidence.
As for the recorder, I ordered mine from eBay for around $20 and it captures great EVPs. EVP stands for Electronic Voice Phenomena which means capturing a voice you did not hear with your own ears while on investigation. Many popular ghost hunting TV shows use the K2 meter but my group uses the ELF Zone meter. They work on the same concept, but the K2 is easier to manipulate while asking questions, it has less filters then an ELF Zone. The ELF Zone runs $10 while a K2 averages around $60.
Your flashlight doesn’t have to be expensive either, just remember to bring extra batteries for your equipment. Spirits are known to drain batteries unexpectedly, so be prepared. Dressing comfortably and weather appropriate attire is a must as well. Jeans and sneakers are recommended since heels tapping on floor would interfere with your recordings.
With your location and equipment ready, it’s time to begin the hunt with my…
5 Tips to Remember During a Ghost Hunt
1) Never whisper. It can be mistaken for a spirit voice when reviewing the recording.
2) Notate time of any personal experience you have on the recorder.
3) Remember to mention when changing rooms so you know where you were if an EVP occurs.
4) When taking photos, try to take at least 3 shots of the same image in order to later compare.
5) Finally, capture the time, date, and location at beginning and end of each recording session, it helps estimate the time length of recording. There are a lot of free download programs to edit your recorder sessions, I use Wave Pad. It’s easy to use, and it offers a time stamp of the entire session.
Ghost Hunting on Television vs. Reality
Popular Ghost Hunting TV shows give you the illusion a hunt lasts only an hour (minus commercials). The truth is… it doesn’t. Due to the magic of editing, footage from start to finish only appears that way. The reality is, a typical ghost hunt can last up to 3 hours or longer. And that’s just the actual time on location.
Once you are back home, the review process is a two-part procedure and can be very time consuming. The photo review is simple. By taking multiple shots of the same image, you should look for any differences compared to the other shots you have if possible.
The real time consuming part of the process is collecting EVPs. For example, if your hunt lasted four hours and two recorders were in use, the total recorded listening time is eight hours. Reviewing recordings can be done in numerous sittings, which I recommend to break up the monotony and so you don’t miss anything. To capture an EVP, listen to an entire recording then crop and paste any findings you have in to a clip for review. Once you’ve assembled your evidence, it’s time to share with your friends and decide if it’s good and clear.
Happy Ghost Hunting!
Cheryl is a Customer Care Specialist for Psychic Source and an avid Ghost Hunter. She is a proud member of the Keystone Spirit Seekers team of paranormal investigators. Learn all about this growing ghost hunting organization by visiting their Facebook page.