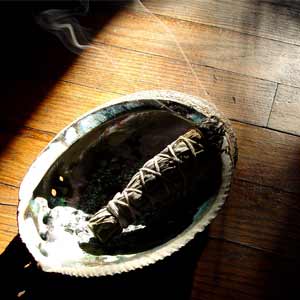 You might not be able to smudge in your current environment.

Years ago, when I was working as a reporter, I was stuck late one night in the newsroom filing a story. There was so much negative energy flying around the place I couldn’t concentrate. I remembered I had a smudge stick in my backpack and figured “what the heck.” Since I was the only one in the office, I fired up the bundle of sage and started smudging the place—until the smoke detectors went off. Luckily the sprinkler system didn’t kick in, but that didn’t stop two security guards from showing up.
The first guard looked, smiled and said, “I’ll have a dime bag of whatever you’re smoking.” The second guard started laughing and replied, “He’s burning sage. My grandmother used to do that all the time.” Needless to say I was embarrassed.
The next day, the bureau chief called me into his office, and before he could say anything, I blurted out: “I was smudging the place with sage!” Knowing that Jeane Dixon was a friend, that Kenny Kingston often called to let me know about Marilyn Monroe’s messages for Madonna or what James Dean wanted Luke Perry to know and that I’d usually end up talking astrology with Jackie Stallone at parties, the idea of me running around the newsroom burning sage in the middle of the night didn’t seem that farfetched. He just said: “Don’t do it again.”
Afterwards, I searched for ways to clean and elevate the vibration of a room without using sage, when a friend recommended a simple solution that clears and cleans any environment– from house to office to the interior of your car–and I’ve been using it ever since!
Here’s what you’ll need:

• A spray bottle
• Holy Water (you can get this from your local church or purchase on the internet)
• Florida Water (an American version of Eau de Cologne, which you can buy off the internet, any botanica, or I’ve even found it at Kmart)
• Cascarilla (ground egg shell, you can buy on the internet or any local botanica)

Pour equal parts Holy Water and Florida Water into the spray bottle. Add a pinch of the Cascarilla (if you add too much it’ll turn chalky and clog up the spray bottle). Shake the bottle and spray. How easy is that?
Repeat at least once a month. But if someone enters your environment that makes you feel uncomfortable or you sense any type of “negative energy,” like after an argument, simply spray around the “affected area.” You can also put a few drops into the washer before doing your laundry, as well as dampen a cloth and wipe down furniture, desks, windowsills, doorways, etc. When you change your bed sheets, spray your mattress and/or wipe it down with the dampened cloth, which will help you sleep since you’ll be keeping the negative energy away.
Best of all, one of the best times of the year to really “clean” your environment is at the start of the New Year or the start of new seasons (like Spring!). So, here’s a simple solution when burning sage is not an option.

belinda101: wonderful ! q:) ~ Being in Canada we have no florida spring water or casicarila ( cant find ) Can One crush egg shells as an alternative? something else instead of Florida water? ... do tell I need to get on this !