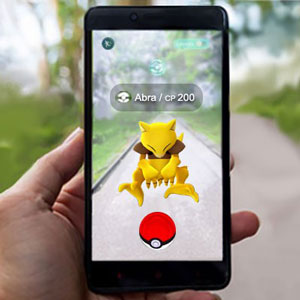 Pokemon Go is just one of many video games featuring Psychic Characters!

Psychics aren't just depicted in movies, television, and novels; they're also well represented in video games, from the ones you play on your desktop computer to those that help you pass the time on your smartphone. Just because you occasionally call upon a real-life online psychic doesn't mean you can't play one yourself in a video game.


Take Pokémon Go, for instance, which has become an instant sensation among mobile gamers. It combines the lovable Pokémon characters with a treasure-hunt style game.

Video games sometimes get bad press, but they can actually relieve stress and reduce the potential for anxiety and depression. Even violent video games can prove useful because they teach adults and adolescents how to handle stressful situations.


Additionally, when you play a video game, you enter a fantastical world that provides valuable escapism. It's no different from disappearing into the pages of a well-worn book or engrossing yourself in the plot of the latest blockbuster at the movie theater.


If you want to take full advantage of video games, consider these psychic characters and the worlds they inhabit.

Many people view psychic powers as a passive ability, but in the classic Nintendo video game EarthBound, Ness uses his psychic powers, which the game calls PSI, to actively fight off the bad guys. As you play the game, Ness' PSI gets increasingly powerful, making him an even more effective weapon. Ness has appeared in many other games, as well, including Super Smash Bros. EarthBound has been recently re-released as a downloadable game on Nintendo's WiiU eShop, so if you missed it when it first came out, or just want to experience it again, it's available for a new generation of gamers.

First appearing in the PlayStation game Parasite Eve, this psychic detective uses her powers to find the bad guys and bring them to justice. She's appeared in five games so far, each with a unique mystery to solve and a new way for Aya to use her powers for good.

Hailing from the renowned StarCraft series, Gabriel Tosh boasts high levels of psychic powers and has earned a reputation for his strange and unorthodox mannerisms. He originally thought his powers came from voodoo, but he later realized otherwise and disappeared from the game.

As a key character in the one-off RPG game Shadow Hearts: Covenant, Lucia serves as the resident fortune teller. In addition to helping guide people down their paths in life, she also helps heal wounded souls through aromatherapy and other alternative techniques. She's also a whiz when giving tarot readings.

If you've joined Nintendo's Pokémon Go craze, you might have encountered Abra. It's a psychic Pokémon that can deliver a powerful Psyshock, which creates a psychic wave that incapacitates the opponent. It can also teleport, which comes in handy because it remains sleeping for 18 hours every day. If its psychic powers detect a threat while it's asleep, it can remove itself from danger. There are additional psychic Pokémon characters such as Slowpoke found in the game, but as they say, you've gotta catch 'em all!


You don't have to be psychic to play a psychic in your favorite games. Thanks in part to the popularity of Pokémon Go, it appears psychic characters in video games won't be going away anytime soon!