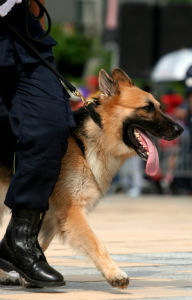 When the animals in your life learn and grow, we do too.

One of the joys of working as a pet psychic and animal communicator over the past decade has been the opportunity to observe lessons I can apply to my own life. It’s an honor to serve as a facilitator between animals and their human companions; when they learn and grow, I do, too.

One sultry summer evening, years ago, I decided to go for a quick stroll around my neighborhood. I set off on my usual route but about halfway through, I felt a sudden compulsion to turn down a side street I normally did not visit. I followed the impulse and when I reached an intersection, I felt immediately drawn to a house on the corner to my right. I was almost magnetically drawn to that particular spot. What in the world was happening?

Inside the house a dinner party was in progress. From the sidewalk outside I could hear laughter and the clinking of plates and glasses. I was facing a shaded porch with a gate in the wall and poking its head through the metal slats of the gate was a handsome German Shepherd. This was what I need to see; this dog was why I felt drawn to this spot. But why?

The dog never glanced at me. It didn’t pant or growl. Its attention was focused on a spot to my left. I followed its gaze across the yard until I saw it: a fluorescent yellow tennis ball. It appeared as if the ball had rolled off the porch and out of reach. The laser-like intensity of the German Shepherd’s gaze on this tennis ball was almost palpable.

It took me longer than I care to admit to figure out that the dog really, really wanted that ball. I crouched and stretched my hand between the slats of the fence surrounding the yard and managed to snag it with a couple of fingers. As I stood up, I noticed a man standing nearby, watching. “I’ve been trying to figure out what he wanted,” the man said, indicating the dog. “I live on the next street over but I felt like I should come by and check on him. I don’t even know his name.”

Now the German Shepherd had trained its gaze on the ball in my hand. I gently lobbed it at him and he expertly snatched it from the air, wriggling with sheer joy. “I guess our work here is done,” said the man. “I’m glad you figured out the mystery!”

We shook hands and promised to patrol that particular block to make sure the German Shepherd’s precious tennis ball hadn’t again rolled out of paw’s reach. In my decade as a pet psychic and animal communicator, I’ve rarely felt an energetic tug from an animal as strong as the one I experienced from a German Shepherd who had an immediate problem that needed solving. And with a calm but intense focus, he manifested not one, but two possible answers. He didn’t just generate what he needed, he manifested more than that.

I’ve never forgotten this gently humorous interlude and choose to view it as a powerful lesson in trust, patience, perspective and clarity of purpose. There was no room for doubt in the dog’s mind; in fact, I’m fairly sure insecurity and second-guessing never entered the picture. It’s a lesson I’ve had to relearn often, but thankfully there are animal companions in my life to show me how to get it right.

Learn about the animal companions in your life with a call to Benjamin!