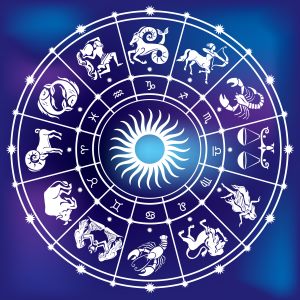 An astrological chart reveals aspects of the individual's character, likes, dislikes, and personality.

An astrological chart is an illustrated diagram that features three concentric circles with the alignments of planets and the 12 signs of the zodiac. An astrologer plots points on the chart and draws lines between them to create aspects.

A native is the subject of an astrological chart. That's why these charts are often called "natal charts," using a root word that means "birth."

An aspect, at its most basic, references the distance between two points (such as planets) on an astrological chart. There are five major aspects and four minor aspects to consider during a reading.

If an astrologer mentions a harmonious aspect, he or she means an aspect that describes a positive relationship between the two points. For instance, the aspect could refer to the individual's innate abilities and talents.

You will also see tense aspects, which indicate a negative or difficult relationship between the points. It could refer to a situation or ability that the native must struggle to develop or repair.

A conjunction means that two planets or points are zero degrees apart. This indicates unity in the astrological reading.

When a sextile aspect appears, it indicates an innate ability or talent that the native must work to develop. It represents a 60-degree separation between the planets.

With a separation of 90 degrees, the square is a tense aspect that indicates conflict. It's designed to encourage the native to take action to resolve the conflict.

The trine is a harmonious aspect that suggests the two planets complement or support one another. It could suggest a gift or skill that comes naturally to the native.

This tense aspect can indicate a choice that needs attention or opposing desires that the native has not yet resolved. The opposition connects two planets with 180 degrees of separation, and many natives discover that they bounce back and forth between the two polarities, unable to decide what they truly want.

There are four minor aspects in astrology: semi-sextile, semi-square, sesquiquadrate, and quincunx. Each represents a minor iteration of its associated major aspect.

You might hear during a psychic reading that a planet has gone into retrograde. This means that the planet looks as though it has reversed direction and currently travels backward from our point of view here on Earth.

A direct movement is the opposite of retrograde. It means that a planet travels forward. Mercury, Venus, and Mars are faster-moving than the other planets, so they switch from retrograde to direct more often.

When a planet is in station, it doesn't appear to move. This refers to the time during which a planet transitions from retrograde to direct, or vice versa.

The astrological chart is a complex device, so it's important to understand the terms associated with it. Now that you're familiar with the jargon, you can get a psychic reading for personalized guidance.