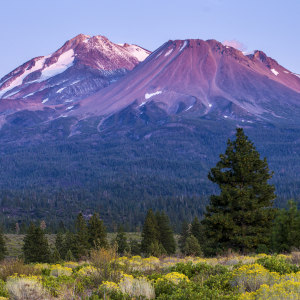 Mount Shasta in California is considered the root chakra of the planet.

When you look at the beauty and rhythm of nature surrounding you, it's easy to see the Earth as a living entity. Just like your body, the Earth also has seven chakras. Learn more about each chakra and where it's located on the planet.

Mount Shasta in California is considered the root chakra. This energy center is where the universal life force gathers before forming individual lives and species. If you plan on visiting Mount Shasta for meditating or for a ceremony, make sure you start with a psychic phone reading so you're open to the universal energy.

Lake Titicaca, which straddles the border between Bolivia and Peru, is the second chakra. A serpent often represents this chakra. It sits in the middle of multiple ley-lines. It's also where primal energy begins to take shape and birth itself into any form.

Uluru, formerly known as Ayers Rock, is in Australia and is home to the third chakra. For the Aboriginal Australians, Uluru is where the Dreamtime stories arise, and it's still a sacred site today. As the solar plexus of the planet, it's depicted as the umbilical cord that supplies energy to all other living things.

The heart chakra sits in Glastonbury and the surrounding communities of Shaftesbury, Somerset, and Dorset in England. As the Earth's heart, this area is known for its intense energy productions. That's why it should come as no surprise to hear that this area has high levels of crop circles that have magnetic abnormalities.

In your own body, your throat is where your voice emerges. On the planet, the throat chakra is at the Great Pyramid of Giza in Egypt. This is the only chakra not connected to a ley-line, yet it's one of the largest energy centers. If you hear Mother Earth speaking through this chakra but can't understand her, a live psychic chat might offer some clarity.

The third eye chakra is the only one that isn't in one fixed spot. Instead, it moves every 150 to 200 years. These movements also line up with the astrological constellations. We're currently in the Age of Aquarius, which means the chakra is in Western Europe near Stonehenge. When the next move occurs to the Age of Capricorn, the chakra will shift to Brazil.

The final chakra is the crown chakra or the highest energy center. It's located at Mount Kailash in Tibet, which is considered one of the most sacred mountains of the Himalayas.

Just like your chakras help you stay balanced emotionally and spiritually, the Earth chakras are an essential part of transmitting energy and keeping all life on this planet healthy and grounded.