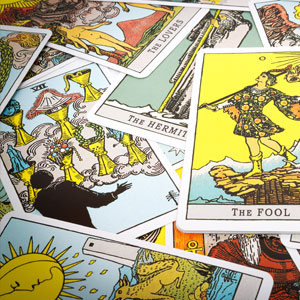 The Rider-Waite is one of the most recognized Tarot Card decks. 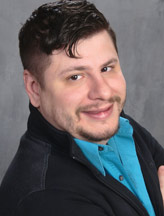 Get a Reading with Zachary x3345
Tarot cards have become one of the most popular tools used by Psychics and have had plenty of mainstream portrayals in the movies and on TV.  But before you get your next Tarot card reading with Psychic Source, let’s take a look at where these mystical cards found their origins and how they have evolved over time to become what we are familiar with today.
The Earliest Appearance of Tarot
The most popular theory that exists on the creation of this oracle that tarot was derived in the 1500s from an Italian aristocratic card game known as “tarocci appropriati.” “Tarocci sortes”, as they were called, contained four suites: coins, cups, swords, and batons (later referred to as “wands”) and court cards: knights, pages, and kings, and later queens. Later on, the “trump” cards were added, creating a 78-card deck (as remains today, most tarot decks are 78 cards). This game was not meant to be a form of divination, but rather a “poetic muse for fun in the playing style of the popular childhood game MASH”. This game got increasingly popular, and eventually people began feeling a more “esoteric” connection with the cards. It’s popularity eventually spread throughout Europe, hence the creation of the Tarot de Marseilles in the late 1700s. This was the first time the cards were used for divination.
Tarot Crosses All Boundaries
In the nineteenth century, the famous occultist known as Eliphas Lévi developed a correlation between the Tarot and the Kabbalah: the Hebrew system of mysticism. This fueled a new belief that the Tarot originated in Israel and contained the wisdom of the Tree of Life. The new theory brought all 78 cards together as keys to the mysteries, but again, there were no concrete facts to support it. Nevertheless, something important was accomplished. The theory would later serve as proof that the symbolism of the Tarot crossed all boundaries. From this point forward, many magical and esoteric groups recognized the Tarot as a timeless body of knowledge that had significance in every mystical path.
Since that time it has been linked with almost every magical system or religion known to humankind. The Tarot is comprised of archetypal images that cross linguistic, cultural, geographical, and temporal barriers. In the United States of America, the Tarot became popular and more readily available in the 1960's, when a period of exploration in spirituality began.
Modern Day Tarot Decks
Arthur Edward Waite is credited with the renaissance of the Tarot in the Twentieth Century. He commissioned artist Pamela Coleman Smith to create what he called the "rectified" Tarot. Created by a member of secret societies also known as a revered mystic, Waite's version has been widely accepted as the standard, and is by far the most popular deck of the century, rich in symbolism and easily understood due to the simple nature of the artwork.
In the opinion of many learned Tarot enthusiasts, the most significant change the deck has experienced is Smith's treatment of the Minor Arcana. Hers are the first "pip" cards to contain images depicting the meaning of the cards. These graphics allow readers to explain the significance of each cards nuance to querents who, in most cases, have never encountered the cards before. This artistic trend can be traced through the majority of the decks produced after the Rider-Waite (1910), and Smith's influence is readily recognized, as many of the images echo her drawings
Today's Tarot card designs reflect specific trends in sexuality, religion, culture, and philosophy. There are literally hundreds of interpretations, and more are being conceived as you read this. The diversity of the styles allows Tarot Readers to choose a deck that suits their personalities, the subject of the reading, the person receiving the reading, or any other variable as they so choose. Certain decks have a serious tone, some have a dream-like quality, others are full of fun cartoon images. The true beauty lies in the Tarot's ability to retain its "soul" through each metamorphosis and incarnation. It is, on many levels, a mirror of those who work with it, and allows them to make each reading a truly personal experience.
Get started today with your free on-line Tarot reading.