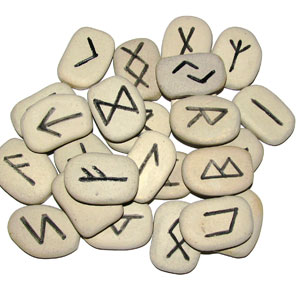 What Do The Runes Have To Say About Your Future?

They have an odd name and an obscure history, but runes are a form of alphabetic divination that's been around for centuries. Today, they still hold a wealth of knowledge that can help people solve everyday problems and make thoughtful decisions about their futures.

Sometimes called Viking runes and depicted in the classic books of J.R.R. Tolkien, runes date back to ancient times and are most closely associated with Scandinavia. Runes consist of 25 stones - 24 with symbols and one rune left blank - inscribed with what's believed to be early Germanic symbols. However, there's disagreement among rune experts about whether a blank rune should be included, since there's no evidence that one was used by the ancients.

Psychic readings are often conducted for people who are interested in learning more about what the future holds for them in their careers and relationships. Taking a longer range view, you can also gain an understanding of your true direction in life through psychic mediums who use runes to connect with divine spirits.

A reading is similar to one using the Tarot, with each stone indicating a different meaning and the placement of each affecting the overall message conveyed.

Each letter in the runes represents a tangible item, but is a symbol for a concept, religious meaning or condition in life. The symbol Mannaz, for instance, means "man" but is generally interpreted as "the self." Laguz is the symbol for water but is often explained as "the flow," or the ebb and flow of life's circumstances.

Some symbols are very down to earth, such as Berkana, which is a birch twig but represents "growth." Other runes symbolize ancient gods and represent the particular strengths of those deities.

Unlike the Tarot, in which a reverse meaning is given when a card comes out of the deck upside down, some runes don't have an opposite message. That's because some of the symbols are the same whether they're right-side up or turned around. One example is Dagaz, which means day. It's often interpreted as a "breakthrough" or the start of a transformation.