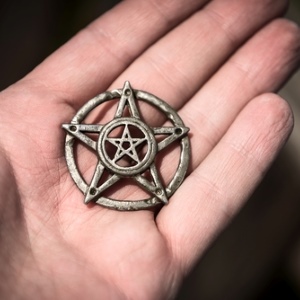 The pentacle (which some people also call a "pentagram") is a five-pointed star with a circle around it. The apex of the star always points skyward so that it faces the divine. Many associate the pentacle with Paganism and other earth-based religions, and for good reason. Its roots in the Pagan culture extend back thousands of years.

Where Did the Pentacle Originate?

Historians believe that the pentacle's origins trace back to the ancient Mesopotamians, who engraved it on pottery and other possessions, and that people used it to reference the four corners or directions.

Why Do People Use the Pentacle?

Many cultures and religious traditions assign meanings to each of the pentacle's five points. The top point often symbolizes gods, goddesses, spirit, or other aspects of divinity. The divine unites the other four points.

For instance, the points might symbolize earth, fire, water, and air, each of which aligns with a particular emotion or virtue. You might use the pentacle as a reference when communicating with your phone psychic, using the points to reference different aspects of your life or path.

Where Should You Use the Pentacle?

Many Pagans use the pentacle during rituals or religious celebrations. Some believe that the pentacle provides protection for those who wear or create it. Others find the pentagram useful for directing energy or focusing the mind.

You can also use the pentacle to align yourself with the elements of the earth or with your spiritual destiny. It's considered an object of great power because of its long history in Pagan traditions.

How Has the Pentacle Evolved?

Like many religious and faith-based symbols, the pentacle has changed over time to suit the needs of specific cultures. For instance, the Pythagoreans used it as a secret sign that identified themselves to each other.

You can also assign your own meaning to the pentagram. What does it mean to you? How does it make you feel? What aspects of the pentagram attract you? Whether you're consulting an online psychic or confiding in your best friend, you can use the pentacle to give you strength and to encourage reflection.

Does Any One Faith Claim the Pentacle?

Many cultures and religions have used the pentacle over the generations, which means it's not beholden to a particular group. Some people might argue over its origins or its meaning, but what truly matters is what the symbol means to you.

Like other faith-based symbols, it's also prone to misinterpretation. Some associate it with Satanism, black magic, and other negative concepts, but it's certainly not an evil or dangerous symbol.

Understanding the purpose and meaning behind the pentacle can help you understand your relationship to it better. If you use the pentagram or pentacle in your faith, you can do so without fear of judgment or mistakes.