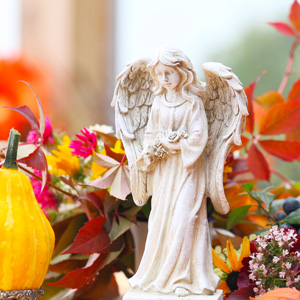 Don't forget, angels are always around us.

Get a Reading with Arthur x8237
A few years ago, I was invited to share Thanksgiving with a dear friend, who’s also a very gifted medium in Beverly Hills, CA. He mentioned the guests were all “spiritually-centered,” so that I’d fit right in. When I asked if there was anything I could bring, he simply replied: “Just bring yourself… oh, and a couple of Angels.”

While driving through the endlessly winding Benedict Canyon, halfway to his house, my car died. I was able to drift the car to the side of the road; however, I was also stuck in an area of Los Angeles known for having absolutely no cell phone service. No matter how many times I tried to start the car, it wouldn’t turn over.  Believe me, I’m no mechanic, so looking under the hood would only be a waste of time. Then I remembered what my friend had said about bringing “Angels” to dinner.
Without skipping a beat, I said: “Guys, I know you’re out there. A little help, please?” I waited a minute. Okay, my car still wouldn’t start, but about a minute later a guy in a pickup truck showed up seemingly out of nowhere and asked if I needed any help. I popped open the hood, he reached in and within two minutes the car started. When I asked what he’d done, he grinned, “I guess I’ve got the magic touch.” (Seriously, that’s what he said!) When I asked if I could pay him, he laughed, “It’s Thanksgiving. Have a nice dinner with your friends.” And then he left in his truck and was gone.
Making my way to my friend’s house, I saw lights flashing, an ambulance, a number of police cars, a lot of broken glass, and then three cars that had collided. There had been a huge accident. Yes, I would have been in that pile up if my car hadn’t “died.” At that moment, I closed my eyes and said: “Thanks guys! Thank you, Michael. Thank you!”
When I eventually got to my friend’s house, he greeted me at the door with a “devilish” grin. “You knew,” I teased. “Of course,” he replied. “Don’t forget Angels are always around us. We don’t have to see them. People don’t have to believe in them, but they are still watching over us. However, when we do recognize that we’ve been helped, it’s always nice to say ‘thank you.’ Which I know you did."
Before starting dinner, my friend joked saying that I’d been “Touched By An Angel.” He then asked if anyone could recall Angels coming into their lives.
One by one, the guests opened up. One woman said she was about to cross the street when a hand grabbed her and kept her on the curb. At that moment, a car ran a red light. When she turned to thank the person, no one was there. She thanked the Angel for saving her life.
Another guest stated how they embarrassingly came up $5.00 short at the drug store. Out of nowhere someone put $10.00 on the counter and kept on walking, he was very grateful and said he put the change in a charity coin box next to the register.
Someone else explained how their cell phone suddenly dialed a friend, who’s the mother of a special needs child, and how she was emotionally overwhelmed in need to talk to someone just when the phone rang. “It’s not like I ‘butt dialed’ her,” he recalled. “I was at my desk and the phone just dialed itself. I know an Angel dialed her number.”
It was a very moving experience as each of the guests shared their Angel stories.  And as my friend stated, Angels are always around us and in our lives, whether we believe they are there or not - they are always looking over us. So, this Thanksgiving, in addition to saying what you may be thankful for, start a new tradition and thank the Angels who just might have touched your life.
HAPPY THANKSGIVING!
Stay amazing,
Arthur

love1947: Excellent story, no myth. I pray to God directly; and ask for my deceased father's help all of the time. God's angels are his ministers for His Power and Goodness, His "executioners" of hope, help, and the true light of wisdom. Thanks for your write-up. I enjoyed your sharing tremendously.