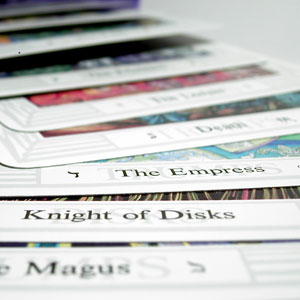 Everything You Need To Know About Tarot&#8217;s Minor Arcana

Tarot readers are able to address spiritual matters as well as the down-to-earth experiences that concern people who seek their help through psychic readings. In addition to their own intuitive abilities and the help they receive from spirit guides, using the tarot cards allows mediums to interpret all aspects of the concerns we bring to them.

While the 22 cards of the Major Arcana often provide meaning for the different stages in our life's journey, it's the 56 cards of the Minor Arcana that address the emotions, activities and concerns we face as we go about our daily lives.


The Four Suits
To reflect this practical approach to deciphering the challenges we face each day, the Minor Arcana is divided into four suits.

The Wands, which represent the natural element of fire, are associated with creativity and movement that's often shown by risk-taking and confidence. The Cups represent water and are linked to our emotions and spiritual experiences. They convey our inward energy and feelings.

To reflect intellect and reason, the Swords represent truth and ethics. However, they also depend on our inner spirit to guide our thoughts so that decisions can be made with mental clarity. The Swords are associated with the element of air. The Pentacles - sometimes called the Coins - are the suit of practical, material matters and are linked to the element of earth. Our physical experiences, including prosperity and our interaction with nature, are expressed by the Pentacles.


Messages In The Cards
Just as with ordinary playing cards, the Tarot's Minor Arcana comes with numbered and face cards. But the Aces have a special place by always announcing the positive forces that are in motion, while the middle cards express a variety of conditions. For instance, 2 represents personal power and 3 is about leadership. Five shows difficulties in life focused on financial loss, ill health and rejection. But the 10 cards in each suit bring the cycle to an upbeat conclusion among the numbered cards.


In addition, there are four court cards as there are in playing cards, but here they represent different ages of life. The King is mature and masculine, the Queen is mature and feminine, the Knight is an immature teen and the Page is an adventurous child.


The Whole Meaning
Each card plays a unique role in expressing the prevalent energy in your life. For instance, the King is focused on outward events and results, while the Queen has a relaxed, inward approach. Feelings, relationships and self-expression are the purview of the Queen. While the Knight is prone to immature excess, he's also eager and sincere. The abandon and spontaneity of the Page best represents the possibilities that lie within a situation.


Whether you're asking about a mundane matter or something of long-standing importance, the Tarot can address it most concretely through the Minor Arcana. The special meaning attached to the numbers and court cards as they relate to the four suits take into account our physical, emotional, spiritual and mental well-being.