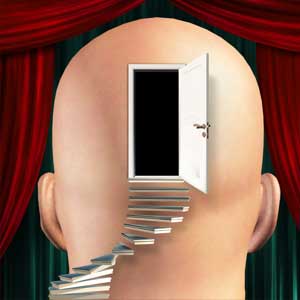 You're driving a car across a bridge, and it suddenly opens in the middle. But you've picked up enough speed to go sailing over to the other side and, while you anticipate the worst, the car settles comfortably on the other half of the bridge. The funny thing is, just as you came down on the other side, you had a feeling you were going to be fine.

Dreams can do that. They provoke anxiety in people, but also produce great clarity. For every dream that sends you on a never-ending search, with roadblocks at every turn, there's a dream that's so ridiculously silly, you awake almost giddy.

There are countless theories about what dreams mean and why we have certain images reappear time and time again. And there are many universals that people share in their nighttime adventures - crossing bridges, losing teeth and water in every form, from rivers to boiling pots.

Universal Experiences
It's not uncommon for people to have recurring dreams, sometimes night after night. Chase dreams in which you're being pursued and feeling threatened are fairly universal. According to Dream Moods, chase dreams stem from anxieties experienced when you're awake. By running, hiding or evading the pursuer, you're signaling how you normally react to daily stresses.

Dream Moods recommended asking yourself who or what you're running from to get a better understanding of your fears. However, if you need an objective voice to help you sort things out, consider having live psychic readings over the phone. When a dream analyzer focuses on your problems, he or she is able to gain insight into issues that you may be blocking.

Another common dream is one in which your teeth are falling out, and there are several theories about why this occurs. One is that teeth are tied to our physical attractiveness and may represent the fear of rejection by others. Another theory suggests falling teeth represent anxiety about being embarrassed in a situation. Third, teeth as a tool for biting and chewing convey a sense of power over something. By losing them, they represent the opposite - powerlessness. The dream may be trying to tell you to be more assertive by expressing your opinions.

Dreams Of Emotions
Water, as the source of life, is believed to represent our subconscious and emotions. Boiling water represents emotional turmoil, while a waterfall may symbolize letting go of pent-up negative feelings. Clear water denotes serenity and, not surprisingly, muddy water indicates that negativity is clouding your psyche.

Bodies of water also represent both positive and negative emotions. While a calm, flowing river may be a symbol of "going with the flow," it may also reveal that you need to take a stronger hand in directing your life. A raging river, on the other hand, indicates things may be out of control, but that you've reached a point at which you're ready to confront problems head-on.

Bridges often come into play in water dreams. Crossing a bridge often symbolizes making an important decision or entering a new stage in life. If you fall off the bridge into water, emotions may be holding you back. When you wake, it may be time to go forward and make a transition complete.