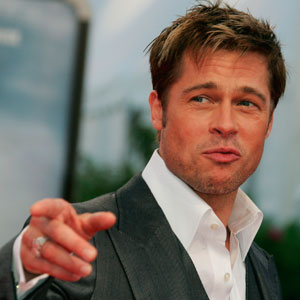 Celebrities, like Brad Pitt, see a psychic when they need guidance, too.

If you turn to a psychic or intuitive during stressful periods of your life, take comfort in the knowledge that you're not alone. In addition to friends and family members who might likewise consult psychics, some of the world's most famous celebrities rely on intuitive professionals to guide them.

Psychic to the Stars

Though Brad Pitt might have consulted numerous other intuitives, he has gained insights into his life and career from Ron Bard, a well-known psychic who has consulted with celebrities as well as business tycoons. Pitt's good friend George Clooney, who starred with him in the successful "Ocean's Eleven" films, also consults psychics from time to time — specifically, to communicate with his deceased pet pig.

Of course, an individual's relationship with his or her psychic should always remain confidential. It's impossible to know whether Brad Pitt has a regular psychic counselor other than Bard, or if he consults online psychics to protect his anonymity. Either way, it's clear he receives excellent support based on his upward career trajectory.

A Match Made in Heaven

Brad Pitt's wife, actress Angelina Jolie, also reportedly sees a psychic. The Huffington Post reveals that her psychic helps her communicate with her deceased mother, which is a common reason to see an intuitive. When you lose a loved one, you might feel the need to reach out for more communication, especially when the loss occurs suddenly.

There are no reports of Pitt and Jolie using psychics together. In many cases, the relationship between an intuitive and his or her client is intensely private, which means they don't involve anyone else in their communications. However, some psychics consult with couples and groups as well as individuals.

Of course, Pitt and Jolie also have a menagerie of children, so they might need parenting guidance, as well. Parents can turn to authentic psychic readings when they feel frustrated or concerned about their burdens as caregivers and confidants. This is especially true for celebrities whose children must face the same public scrutiny to which their parents are subjected on a daily basis.

Many might wonder why Brad Pitt feels compelled to consult a psychic when his life seems, by all accounts, as charmed as they come. However, it's impossible to know the struggles and obstacles that a celebrity like Pitt might face in his day-to-day life. A psychic might offer him insights that he can't glean elsewhere.

Furthermore, celebrities like Brad Pitt lead intensely public lives. They're constantly battling photographers and journalists as they attempt routine tasks, such as grocery shopping and dining in a restaurant. A psychic allows celebrities to unload their emotions and to find guidance to reasonable solutions. It's also a private source of guidance — something Brad Pitt likely doesn't take for granted.

Learning that celebrities use psychics can help you see the value in such a consultation. Whether you're interested in numerology, astrology, past life experience, or some other facet of this practice, you can benefit from a psychic's wisdom and guidance.

Take a detailed look at the influences psychics have had on Brad's ex-wife Angelina Jolie.