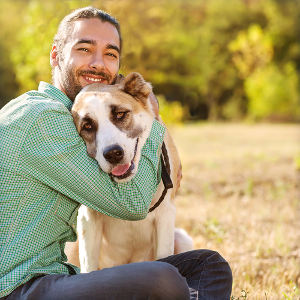 Your furry best pal might perceive spirits you can't see.

In horror movies, the first indication of a malevolent spirit's presence in a spooky house often appears in the form of a dog barking at an empty corner of a room or a cat clawing at the air. Many people believe that animals can sense the supernatural, but where and how did this belief originate? Does it have merit?

Evidence of Animal Connections With Spirits

Paranormal phenomena expert Stephen Wagner collected a few stories dealing with pets and the supernatural, each of which provides evidence that animals possess extrasensory perception. Each of the stories also provides further proof of the encounter, as the humans in these scenarios could hear or sense a presence, but not see it.

Some people believe that cats sense ghosts more readily than dogs. Additionally, some believe that cats remain behind after they pass on, perhaps inhabiting their former homes in ghostly form without their physical bodies. A psychic can help you analyze any behaviors you witness among your pets.

Crossing Science With the Supernatural

Scientific studies prove that dogs possess keener senses than their human counterparts. Their ability to smell, see, taste, and hear input their human owners can't detect might have something to do with their sixth senses.

It is possible that heightened natural senses could contribute to an animal's ability to detect spiritual presences. Since it's impossible to know for sure how Fido and Fluffy perceive their world, it's likewise difficult to predict how they might communicate with or sense the spiritual world.

If you notice that your pet exhibits strange behaviors in response to invisible stimuli, consider booking a psychic online reading. Discuss the behaviors you've noticed and work through ways to determine whether you're correct in your perception of the situation.

The stories collected over the years of animals communicating with the spirit world often feature common denominators. For example, people frequently report that their pets seem to focus on something that does not exist.

Additionally, pets might respond with playfulness, fear, or anger when confronted with a possible spirit. For example, dogs sometimes growl at sights or sounds their human owners can't discern, while cats hiss or claw at the air. You might see your dog chasing and barking at an invisible playmate or you could notice that your cat avoids a specific room in the house.

Determining whether the presence is malevolent or benign could help you decide how to proceed. Some stories involving pets and spirits are uplifting; for example, some believe that former pets come back to visit their housemates after they pass.

However, many stories indicate that pets are afraid of the presence they detect. This could provide evidence of a malevolent spirit in the home or it could simply mean that the animal doesn't understand what's happening. For example, pets often bark at strangers on the street, but this doesn't mean that the stranger possesses ill intent.

It is impossible to know whether pets enjoy heightened senses when it comes to the spiritual world, but it's worth investigating if you notice strange behaviors among your pets.