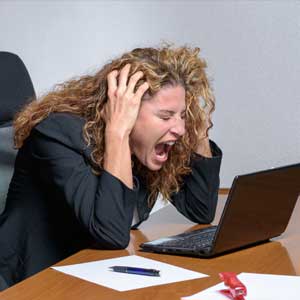 When you are angry, does this look familiar?

by Heather x7756
We’ve all heard about anger management skills and most of us assume we know what it means to manage anger. Unfortunately, a lot of myths have developed over the years and some ideas commonly accepted as true have been statistically shown to be false.

Let's explore six of these myths around Anger Management and explain why they are not accurate.
Myth 1: Yelling/Screaming or Venting Decreases Anger
This is simply not true. Yelling or screaming is a way to release anger but it also magnifies it and becomes more intense as it takes on a life of its own. It may decrease any fear you have mixed in with your anger since it tends to give a sense of power and intimidation of others. You may confuse the decrease in fear with a decrease in anger.
Myth 2: Telling People Exactly What You Think Helps Avoid Physical Ailments Such as Headaches and Ulcers
In reality, it is the hothead who often suffers more physical ailments including hypertension and coronary heart disease. Also, telling people exactly what you think has its own set of consequences. What you say, how you say it, and who you say it to are all important things to consider. For example, telling your partner that he or she is a “*&%$*” may feel good in the moment, but it’s not likely to have a positive outcome.
Myth 3: Hitting Inanimate Objects with a Bat or a Fist is a Good Way to Deal with Anger
This is practicing an aggressive behavior that leads to more intense anger and remember “practice makes perfect.” Hitting can also lead to the natural consequence of getting physically hurt. When you hit something, you take a chance on hurting yourself. This leads to more frustration and can make a bad situation worse. The common result is: more anger. Breaking patterns means learning new ways to think, behave and feel and not resorting to older behaviors and impulses.
Myth 4: Stereotypes: Angry Men are Macho while Angry Women are Bitchy
These negative, common stereotypes feed the myth that for a man to be strong he has to show his anger by being aggressive. The stereotype of women puts them in a double bind. If they show anger they are labeled as offensive, but if they do not express anger, they are labeled as passive and weak.
Myth 5: Aggression is the Natural Outcome of Anger
Anger is an emotion. Aggression is a behavior. People learn to act aggressively. They often believe that is the only option they have to deal with difficult emotions. This leads to excusing and justifying behaviors.
Myth 6: People Shouldn’t Talk About Being Angry
This may be the most harmful myth of all. Talking about anger does tend to reduce its intensity. Ranting and raving certainly doesn’t help, but really talking about why you feel anger can lead to insight and solution focused thinking.
Remember, even if you aren’t a violent person, you may, at times, have difficulty controlling the emotion of anger. But anger management really is a skill that can be learned and it does help improve your mood as you learn to take responsibility for behavior and deal with bad situations.