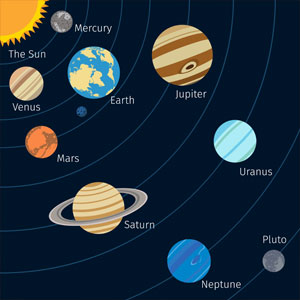 5 Planets in Retrograde at once???

Get a Reading with Arthur x8237
If you’ve been feeling like a lot of things are “out of whack,” you’re not alone. We’ve had five planets simultaneously in retrograde since April 28, 2016. Yep, FIVE planets in retrograde, the first time in ten years.
So, when a planet “goes retrograde” it’s not actually going backwards. It’s an illusion caused by the moving Earth passing the outer planet in its orbit. However, illusion or not, a planet in retrograde usually shakes things up – and we’ve been dealing with five!

First of all, I recently wrote about Pluto Retrograde and Psychic Suzi covered Mars Retrograde. Okay, so what about the rest?
Well, most people know that a Mercury Retrograde means issues with, phones, communication (miscommunication), travel (delays), and computers (crash). Mercury retrograde in Taurus means a “slow flow” of energy. While Mercury energy moves quickly, Taurus is an Earth sign, and the energy moves at a slow and calculated pace. And while it’s not a good time to sign contracts or buy the big-ticket items, it is time to do your comparative shopping and go over contracts with a keen eye. To get through this unscathed, it’s best to slow down, take your time, and make sure every “i” is dotted and every “t” is crossed.
Jupiter basically symbolizes good fortune and success, as well as, expansion and growth.  When Jupiter is in retrograde, it usually takes more time and energy to create the success and prosperity you’re hoping for. Jupiter’s retrograde in Virgo suggests it’s going to take more time and work to get the results you want, while focusing on the areas of your life that you need to expand upon and what needs to happen in order to make any significant shifts and changes to better your life.  Luckily, Jupiter moves direct in May 9, 2016, which can boost success and your personal finances.
Saturn, the father of the zodiac, rules karma, time, and limitation (think discipline, commitment, stability, structure and support, as well as, confinement, fear and obstacles). Saturn retrograde in Sagittarius is about looking where you are spiritually in your life, in addition to what is and is not working. If something’s not working you may have to rebuild from the ground up. If you believe in karma, past wrongs may come back to bite you in the butt, so relax and deal with them.
While a single planet in retrograde can make things difficult. Five planets in retrograde can be a little unnerving. I’d suggest taking everything in stride and try and keep grounded. Actually, spending time in nature can help with grounding yourself. You can also take a hint from Simon & Garfunkel:
Slow down, you move too fast,
You got to make the morning last.
Just kicking down the cobblestones.
Looking for fun and feelin’ groovy!
Stay amazing!
Arthur