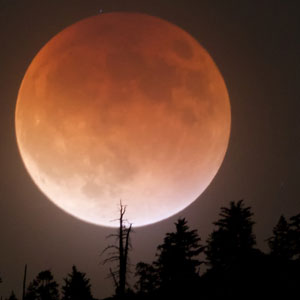 Get a Reading with Arthur x8237
So, you’ve seen one Super Moon or Lunar Eclipse you’ve seen them all, right? Well, you just may want to rethink that. Sky gazers are in for a real treat in the overnight hours this January 31st, when the heavens bring us a stunning rare phenomenon – A Super Blue Blood Moon Lunar Eclipse. It may sound like the title of a lost Ed Wood film, but it's simply the convergence of three celestial occurrences all happening at the same time.

Don't miss out thinking you'll just catch it next time, this extremely rare triple combo doesn't happen very often.  As a matter of fact the last time a Super Blood Moon Eclipse took place over North America was way back in the year 1866!  So what is it that is actually happening up above you may ask...  Allow me to explain.
First of all, a Blue Moon is the second full moon of a calendar month or the 4th full moon during the same season. January 1st brought us the first full moon of 2018, which just so happened to be a Super Moon, when the full moon appears larger and brighter to the naked eye.
And this super blue moon will also take place during a total lunar eclipse, when the Earth moves between the sun and the moon, blocking the sun’s light from reflecting off the moon. If the skies are clear, the total eclipse will be visible from eastern Asia across the Pacific Ocean to western North America.
Also, the cool thing about this is this type of lunar eclipse makes the moon appear to be blood red, due to the way the blocked sunlight bends. So prepare yourself for the super blue blood moon the night of the lunar eclipse. According to NASA, the best time to watch the sky, to get the full visual effect of the lunar eclipse is at moonset. Depending where you live you may have a better chance to see a total or partial eclipse. This handy guide from Space.com will help you figure out your best logistics, along with some tools to make it easier to view these natural phenomena.
Now, astrologically speaking, January 2018 concludes with a very powerful full moon on January 31st. This full super blue moon is also a lunar eclipse in the regal astrological sign of Leo. It is part of a series of eclipses, which fall along the axis of Leo and Aquarius.
On one hand, in Mundane astrology, the sign Leo represents politicians, social and society leaders, celebrities, many royalty families. Leo is considered a dynamic fire sign endowed with passion, nobility, honor and leadership. On the other hand, Aquarius rules the collective will and is the sign directly opposite Leo. The Water Bearer is air and one of the zodiac signs associated with rising above personal concerns for the benefit of the collective good.
Full moons can bring affairs to a conclusion, since often times, information that was once hidden now comes to light. Now add a lunar eclipse into the mix and you’ve got a powerful wild card. In some cases, the energies can illuminate details around a situation often leading to a change in one’s perception and ultimately a substantial course correction.
In other cases, an eclipse can usher in an unforeseen events. Because Eclipses are very powerful full moons, which will not only shift affairs for people, they can bring about notable political shifts around countries as well. Those most affected by this eclipse will be born between January 29 to February 3 and August 1 to August 7.
If you know your astrological chart and have personal planets located at 11 to 12 degrees of Leo or Aquarius, you may find that this year will be a stepping off point for changes to come.
For Aquarians, their Sun will be highlighted indicating a possible change in career, desire to change one’s identity or life’s direction. Leos need to look out for May, when some information will come to light that will help them gain perceptive. Emotions can ride high around a full moon, just like the oceans tides, so it is a good to time to figure out your intentions and get yourself grounded and centered – more “Stop, Look and Listen,” than “Duck and Cover.”
Also keep in mind; eclipses help us move forward in our lives. They come in pairs and these pairs are part of a larger series of eclipses. Most years we experience only 4 eclipses, but some years offer more. Just note that the years where an eclipse falls on your Sun, Moon, Rising Sign or Ruling Planet in your astrological chart, there you can expect to see turning points or even unexpected events.
Whatever January 31st brings you astrologically; still keep on the look out for a spectacular and memorable show in the sky!
Wondering how these upcoming events may impact your life? Give me, or one of the other talented astrologers here at Psychic Source, a call to ease any worries.
Stay Amazing!
Psychic Arthur x8237