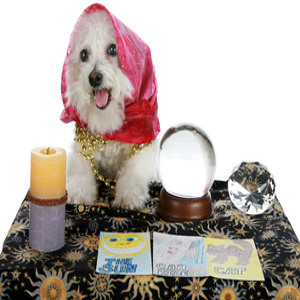 Is it possible that your pet could predict the future?

With so many anecdotes about pets seemingly knowing about what's going to happen before they occur, it's no wonder that many feel that pets are psychic. Not yet a believer? Here are some stories of pets with other worldly abilities.

As written in an article in Daily Mail, Dr. Rupert Sheldrake is a big believer in pets' abilities to make predictions and connect with their owners telepathically. One of the big indications are pets that prepare for their owners' return at the end of the workday long before there is anything that pets possibly could sense. Sheldrake has accumulated stories from over 1,000 dogs and 600 cats that were able to accurately predict their owners' returns long before a car engine could be heard. This includes those who have irregular work schedules.

Where Did the Cat Go?

Another common anecdote is when it's time to go to the vet. Many pet owners have related that their pets sense when they have veterinary appointments and will disappear hours before it's time to go. One such example was a cat named Lance. Lance's owner was talking on the phone to a friend and mentioned that she was taking him in the next day to get him "fixed." Not only did he disappear before the appointed time, but he never returned. Guess he figured he would take his chances elsewhere. If this happens to you, consider getting a pet psychic reading online to find out what happened to your pet.

One couple has used their home as a refuge to over two dozen pets that had no place to live, providing them with food, shelter, and a loving home. Though most of these pets are rescued through different shelters, over the years, six cats and two dogs that needed homes just showed up. Considering most people might only run into a stray dog or cat once or twice in a lifetime, this seems unlikely to occur unless these pets have some sort of sensitivity that allows them to know that at this home, they will be loved and cared for.

Animals Can Communicate with Sensitive Humans

As reported in a story by the Baltimore Sun, owners can use the skills of pet communicators to understand what is going on with their pets, especially if they're having new problems and the owner doesn't know why. With such a case, an animal communicator was able to help one cat owner understand why her cat was suddenly leaving "presents" outside of her litter box. The communicator said the cat didn't like her new shampoo. Once the owner got rid of the shampoo, the cat started using the litter box properly again.

In the end, it's hard to ignore all of these stories and say that animals don't have any sixth sense abilities. There are definitely some animals that have a connection to their owners far beyond our ability to understand. Are you a believer in the possibility of psychic pets?