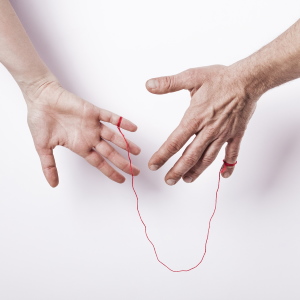 The red thread between two partners secures them to one another for life. It may stretch or tangle, but it will never break.

There's an ancient legend that tells of a powerful invisible thread that connects soul mates and binds them together for life. This engaging tale offers some intriguing insights for those who are seeking lasting love. If you believe the legend, you don't need to work very hard to find your ideal partner in this life. The fates are already drawing him or her to you.

The Myth of the Invisible Thread

The legend of the invisible thread, alternately referred to as the "Red String of Fate," comes from an ancient Chinese myth. This legend claims that the gods tie fated lovers together with a red thread that's connected to them from birth. Some tales indicate that the thread is tied to the pinky finger, while others point to the index finger or ankle.

The Story of the Thread

One popular story used to illustrate this concept tells of a young boy who comes upon an old man reading a book. The boy asks what the book is about, and the old man tells him that it is a book of marriages. The man then shows the boy who he's destined to marry, pointing to a young girl nearby.

Upset at the idea of having to marry anyone, the little boy throws a rock at the girl, then runs away. Years later, the young boy — now a grown man — enters an arranged marriage. When he unveils his bride, he notices a scar above her eye. He asks where she got the scar, and she tells him that a little boy threw a rock at her when she was young.

How the Thread Works

The red thread, which is invisible to the naked eye on this plane of existence, forms an unbreakable bond between two people. Though it may tangle or stretch, it can never break. This thread forms a lifelong bond for those who are fated to be together. It begins to tighten as the two people grow up, ultimately bringing them into each other's lives.

When one believes in the invisible thread between two people, they can more easily give their fate over to the universe. With the thread in place, you needn't worry about seeking your ideal mate because they are already attached to you and coming closer every day. If you want a glimpse at this thread, a love tarot reading or love psychic reading may provide some insights. 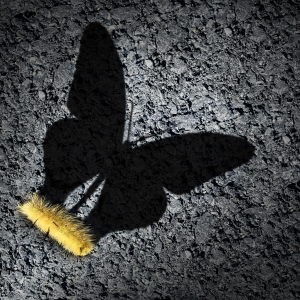