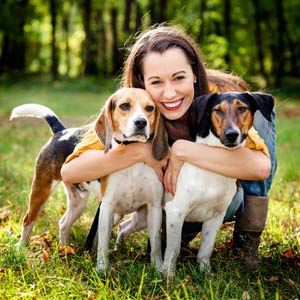 Do these puppies have special powers?

Just like humans, animals can have psychic abilities. They can sense when things are about to happen, find their way back when they’re lost, communicate telepathically, and so much more. Don’t overlook what your pets are trying to tell you — they may be using their psychic abilities to help you out. Take a look at these four psychic abilities found in animals and how you can recognize them in your pet.

Some Animals Have an Internal Homing Beacon

Countless movies, books, and songs have been written about the miraculous ability of some pets to find their way home no matter how far away they have gone. Do you remember the popular “Homeward Bound” movies in the 1990s? What about the really old camp song, “The Cat Came Back?” Not all pets have this internal homing beacon, but some have an incredible sixth sense that helps them find their owners, no matter how far they have gone. It’s also one way pet psychics can help you find your lost pets.

Some Animals Can Sense Danger

One of the most miraculous psychic abilities found in some animals is their sixth sense for danger. Sometimes pets even try to warn their owners before something bad is about to happen. For example, in 2004 right before the Indonesian tsunami, animals were spotted running from sea level to higher ground. Even some elephants carrying tourists decided to find safer ground and began to flee with the tourists still on their backs.

Some Animals Can Communicate Telepathically

Animals can't talk like humans, but they still communicate with other animals and their owners. Many pets have telepathic and empathic abilities that let them feel what their owners are feeling even if they are not in the same location. One example of this is the anticipation found in some pets when their owners are about to arrive at home. This happens even when the owner is coming home at an unusual time. Some pets can just sense their owner’s intentions.

Some Animals Can “Talk” (Rare)

Dr. Doolittle aside, there have been several reports of talking animals throughout history. There was the “Talking Horse” named Morocco in France; the “Wonderful Intelligent Goose” and the “Learned Pig” in London; the “Sapient Pig,” “Spanish Pony,” “Toby the Celebrated Dog,” and “Two Curious Birds” in Spain; and a horse named “Clever Hans” in Germany.

Talking animals are mostly legend because the phenomenon has never been caught on camera. However, it could truly be a rare psychic power, since there are so many stories about it in different cultures around the world. Your pet probably can’t talk, but make sure you get it on camera if words ever come out of your pet's mouth to prove this psychic ability to the world.

If you watch your pet closely for signs of psychic abilities, you may be surprised what you learn. An online psychic can help you understand your pet’s abilities and help you figure out what your pet is trying to tell you.