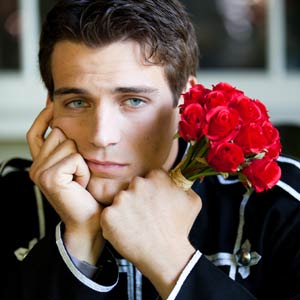 A psychopath looks charming at first, but there's something a little off.

Psychopathy is a rare condition that’s notoriously difficult to diagnose. A true psychopath lacks the ability to feel empathy and emotions the way a normal person would. This can make the psychopath dangerous and particularly prone to hurtful or criminal activity. If you suspect a boyfriend or husband of psychopathy, these signs will help you analyze his condition.

Psychopaths are excellent at slathering on the compliments. They lay it on thick and constantly use their silver tongue to get what they want – including you. At first, you probably got swept away in these compliments, but the flowery words begin to fall flat over time. You may have noticed that he uses compliments with nearly everyone he comes across, from waitresses to concierge staff, as long as he has something to gain from them.

Pay Attention to How He Shows Emotions

Someone who is genuinely psychotic can’t feel emotions. This means that he doesn’t genuinely feel love, anger, remorse, guilt, fear, or anything else. In an effort to fit in with those around them, however, psychopaths will often mimic the emotions that they observe in others. Pay attention to how he shows emotions and you may notice that he’s simply mirroring those around him. Most people show an emotion like happiness in their own individual way, but a psychopath will just reflect the way people are acting around him.

Focus on Your Differences

Mirroring is a popular tactic in business situations for making connections and getting others to feel comfortable with you quickly. Someone who is psychotic probably uses this technique in nearly every part of their life, including their relationship with you. Look hard for differences instead of similarities. A psychopath will often simply become whatever you are to make you comfortable and get what he wants. An authentic psychic can help you see past this phony mask, even if you can’t see it yourself.

Keep Track of His Lies

Psychopaths feel no remorse or guilt, so they’ll often lie uncontrollably to get where they want in life. They see no down side to it since they can’t understand the concept of morality the way a normal person can. If you find yourself mired in lies, you may be dealing with a psychopath. A love psychic can help you identify some problematic areas where you’re dealing with lies.

Ask About the Future

It’s difficult for a psychopath to see reality for what it is. He will often have grandiose ideas about the future, and believe that nothing can stop him from getting what he wants. There’s a fine line between a psychopath and someone who’s just ambitious. Look for hopes and beliefs about future plans that are truly outrageous. Someone who’s ambitious will have a plan that just might work, while the plans of a psychopath are often next to impossible.

If you believe that you are truly dealing with a psychopath, it’s best to go your own separate ways rather than get sucked in to an unhealthy relationship.