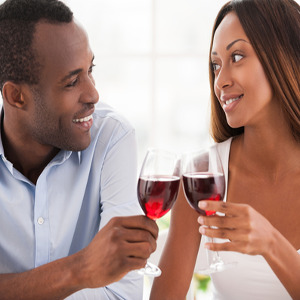 Sometimes it's hard to tell when it's right to slide out of friendship and scoot into dating.

Every day, women waste hours stressing over every perceived slight by the men in their lives, wondering whether their affections are returned. Bottom line: men and women communicate differently.

Reclaim your happy head space. Instead of agonizing over whether something you said, did, or wore might have compromised a potential love connection, check out these clues to decipher the male love code.

As much as men try to act smooth when they like a woman, true affection tends to spoil their game. If he shares embarrassing stories, tells you about his life, and seems to genuinely want to continue talking, then he's put down his guard.

A disinterested guy will look elsewhere, adopt a flat expression, and appear somewhat bored or overly polite. On the other hand, consistently raised eyebrows, inquiring about you, and using his hands expressively during a chat proves he wants to hear from you more often.

In dating, eye contact is truly a make-or-break indicator. If he's not making it, then he probably wants out.

Keeping eye contact with someone usually feels uncomfortable. However, locking his eyes on you beyond a couple of seconds suggests he likes what he sees, and he wants you to know it. In his gaze, he shows that he's not scared to connect and break friendly social rules.

Try a psychic chat if his eyes aren't connecting to your intuition. His shyness or personality might play a role.

Some men use comedy as their go-to flirting tool. On the comedy scale, teasing usually grazes the bottom; still, while misinterpreted among children, teasing often works in adulthood.

If his teasing comes off as cute, tease back and see how he reacts. It could spark a more intimate conversation.

Men talk to women they like in special tones of voice. If he talks casually, as though he were shooting the breeze with his buddies, then he thinks of you as more of a friend than a soulmate. But if his voice sounds excited or more pronounced, that's a sign of genuine interest.

Plus, men make small gestures that convey ownership or protection when they want to date a woman. If he offers his jacket in the cold or rain, he may be sending a signal that he only wants you to wear his jacket. It also gives him a chance to see you again for its return. Still, if you find his unique attention difficult to understand, live psychic readings help to further interpret his actions.

Men love the "accidental" touch. Whether it's an arm graze or a hip bump, don't disregard this red flag.

Interested men especially love to guide women in a room. By putting his arm on your elbow or small of your back while walking, he's not just acting gentlemanly; he wants the other men in the room to know that you two came together, and he's definitely sending you a signal of his desire.

With these clues in tow, you have a clear guide to his heart. Now you can decide if he should shift into the friend-zone or slide into more romantic territory.