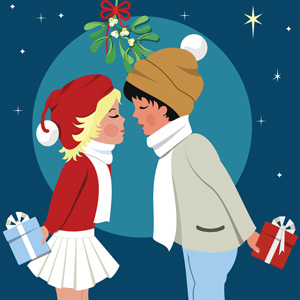 Try to steal a kiss under the mistletoe during December's full moon! 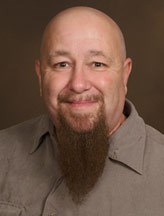 Get a Reading with Joseph x7535
The Full Moon in December is called the Cold Moon. It is also called the Long Night's Moon, The Oak Moon and the Moon of Winter. The Cold Moon falls on December 13th at 7:06PM Eastern time.
A Moon for Divination
The icy cold nights and frosty mornings of December is the darkest time of the year. The Cold Moon is the Full Moon that falls before the Winter Solstice. The Winter Solstice is the darkest night of the year. The Winter Solstice falls on December 21st. This is the day of the year that has the shortest amount of daylight and the longest night. After the Winter Solstice the days will start to get longer as we get ready to welcome the return of the sun and the coming of the springtime.
The night of the Cold Moon is a good time for divination. Reading the Tarot cards, casting the Runes or any type of divination is favorable on this night. An old and very simple method of Cold Moon divination is to toss a shoe over your left shoulder. If the shoe lands upright, the predication is favorable for the coming year.
A Night for A Romantic Kiss Under the Mistletoe
As December marches on, we are fully immersed in the wonder and joy of the holiday season. On the night of the Full Moon with the glowing orb high in the sky and all the powerful energy that comes with it, it becomes a highly charged, romantic opportunity to steal an extra special kiss underneath the mistletoe. But did you ever wonder where that holiday custom originated?
Kissing under the mistletoe is a tradition that was handed down to us from the Druids. Even though the tradition has changed a lot over the years, it still remains today. The mistletoe was very scared to the ancient Druids who would gather it from the high branches of the Oak Trees with golden sickles. Mistletoe has been known to possess mystical powers which bring good luck to the household and wards off evil.
Mistletoe’s association with romance dates back to ancient Norse mythology. By the 18th century, stealing a kiss beneath the mistletoe became a common practice in Britain and the tradition spread from there. It’s often considered bad luck to refuse a kiss beneath the mistletoe. After each kiss, the couple is supposed to pluck one of the berries from the mistletoe. Once all the berries are gone, it no longer has the power to command kisses.
Whether you choose to cut your mistletoe or buy a few sprigs at your local garden center, I hope someone special is waiting for you in the doorway where it is hung.
A Tree Full of Lights and Memories
Another holiday custom we see during the cold nights of December is many a fur tree decorated with a rainbow of colored lights that will be sure to warm the hearts of young and old alike. In days of old, the fur tree was chosen to be decorated with ornaments of fruit, flowers and plants to represent the coming of spring time and the promise of a new and bountiful harvest in the year ahead. We may not use the same types of ornaments today, but most families have their own special baubles they use to decorate their trees that not only offer cherished memories of the past but introduce new traditions to be passed along to future generations.
This is a magical time of the year. A time to spend with family and friends, a time for food and festivities, song and merriment. Enjoy the Cold Moon and the winter energies and holiday traditions that come along with it!
Wishing you and yours all the Blessings of this festive season,
Joseph x7535