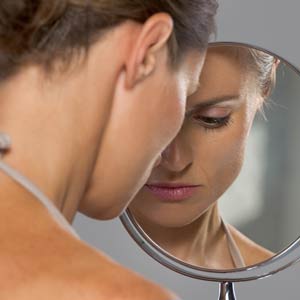 What you see in the mirror is often different from the attractive woman he sees.

Whether you’re unsatisfied with your current experience, or you’re simply noticing some changes in your relationship, it’s not uncommon for a woman to wonder whether her man still finds her attractive. If you’ve been pondering this question, here are some way you can really tell.

Pay Attention to Where He’s Facing

Look at the direction your man’s body is facing the next time you’re having a conversation with him. Turn off the television and make the effort to really talk. If he turns toward you so your bodies are facing one another, this is a classic sign of physical attraction. The further he’s turned, the more interested he is in something more than just your conversation. A guy who faces straightforward or crosses his legs away in the opposite direction is pulling away.

Go out to dinner together or arrange for a leisurely meal at the dinner table at home. Don’t try this when you’re eating in front of the television or your results will be skewed. Follow your man’s eyes as he’s talking to you. If he’s attracted to you, you’ll notice that his eyes linger on yours and perhaps drift appreciatively to other parts of your body. A man who’s more focused on his food, other diners, and other distractions may be less attracted.

It’s unfair to accuse your significant other of feeling cool toward you if you aren’t giving him proper credit for his actions. Does he brew coffee for you in the morning, put gas in your car, or watch the kids so you can take a bath? If a man goes out of his way to see you smile, there’s a good chance he’s still very much attracted to you. A psychic hotline can help you if you’re having trouble reading these types of actions.

If you feel uncomfortable in your own skin, you’re probably pulling back and perhaps even pushing your man away. If you want to know how attracted he is to you, put the moves on him and simply see how quickly he responds. It really is as simple as that.

Put Some Effort into Your Appearance

Sometimes worrying that a husband or boyfriend doesn’t find you attractive becomes a self-fulfilling prophecy. You’re so convinced that he doesn’t want you that you stop putting any effort into how you look. If you’re keeping him at arm’s length, shuffling around in sweats, and skipping showers, it’s no wonder some of the spark is gone.

If you’re stuck in a rut of self-depreciation, try talking to a phone psychic to rediscover your best traits and get some of your spark back. Go all out pampering yourself and become the beautiful woman that you know you can be. If he doesn’t appreciate you at your finest it’s his loss and not yours.

It’s easy to convince yourself that someone is no longer interested, but many times the problem is all in your head. See yourself as attractive and he probably will too.