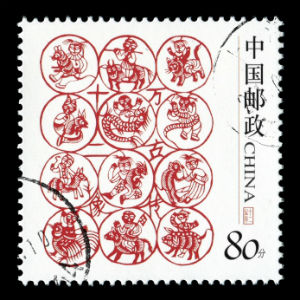 This year, the Chinese New Year starts Feb 10 - shorty after the New Moon in Aquarius. Celebrations will take place all over the world on Sunday and Monday, with the eve of the New Year, Saturday, February 9, being especially noteworthy for its traditional and lavish family reunion dinner. Historically, the Chinese New Year is a celebration of Spring - a time when farmers would ready their fields for planting after winter's rest. It also ushers in a new year of the Chinese Zodiac.

Unlike Western astrological signs, which are based on the twelve planets of our solar system, animals represent the twelve signs of the Chinese Zodiac. The year in which you are born determines your “sign” or “animal.”


The lunar Chinese New Year (CNY) calendar below shows which of 12 animals you are!  Note: if you were born in January or February you need to check if your birthday was before or after the date of that Chinese New Year. (If it was before this day your animal is the one shown for the previous year).

Rat –1912, 1924, 1936, 1948, 1960, 1972, 1984, 1996, 2008, 2020, 2032, 2044
Though in people’s eyes, the rat is not adorable, and even some Chinese sayings that related to it have almost derogatory meanings, it ranged as the head of the Chinese zodiac. It was recognized as an animal with spirit, wit, alertness, delicacy, flexibility and vitality.
People under the rat sign are usually smart and willing to accumulate wealth and to make efforts to be successful. Throughout their lives, there will be many other people who can bring great fortune to them. Thus despite timidity, most of them are happy and harmonious with others.
Compatibility – Best match: dragon, monkey, ox; Avoid: sheep, horse, rabbit, rooster

Ox – 1913, 1925, 1937, 1949, 1961, 1973, 1985, 1997, 2009, 2021, 2033, 2045
Ranked as the second zodiac, the ox has a large volume. In the life, people often used the ox to indicate something big or large in number. The ox is sedulous, simple, honest, and straightforward. Fractious people are said to have an ‘oxen temper’.
People born in this year are probably honest, laborious, patient, obstinate, and poor at communication. Leaders in their career may not discover their abilities. In their old age, they would be bestowed with happiness. Women are usually good wives who pay attention to children’s education, but are likely to believe others’ cajolery, so should be cautious.
Compatibility – Best match: rat, snake, rooster; Avoid: dragon, horse, sheep, dog, rabbit

Tiger – 1914, 1926, 1938, 1950, 1962, 1974, 1986, 1998, 2010, 2022, 2034, 2046
Tigers, considered to be brave, cruel, forceful and terrifying, are the symbol of power and lordliness. In ancient times, people usually compared emperors or grandees with the tiger. Court officials often said that ‘accompanying the emperor is just like being at the side of a tiger’. There are also many legends on hunting tigers dealing with struggling against evil might.
People born in the year of the tiger are tolerant, staunch, valiant, and respected. In their middle age, their fate may be uneven, but afterwards will enjoy a bright prospect. Their shortcoming is to project themselves before others. But most women under the tiger sign are intelligent, faithful and virtuous.
Compatibility – Best match: horse, dog; avoid: snake, monkey

Rabbit – 1915, 1927, 1939, 1951, 1963, 1975, 1987, 1999, 2011, 2023, 2036, 2047
The rabbit has represented hope of the Chinese people for a long time. It is tender and lovely. The moon goddess Chang’e in Chinese legend had a rabbit as her pet, which stimulated the thought that only the rabbit was amiable enough to match her noble beauty. The Chinese character ‘Tu’ (rabbit) is part of ‘Yi’ (escape or leisure) indicating speed and distance. The Han people have a custom that a pregnant woman is not allowed to eat rabbit meat for fear that the child will be born with a harelip. The newborn is given paintings of children and rabbits representing that the child will have a peaceful and happy life.
People born under the sign of the rabbit are gentle, sensitive, modest, and merciful and have strong memory. They like to communicate with others in a humorous manner. They cannot bear dull life, so they are good at creating romantic or interesting spice. But they lack meditative abilities and often sink money into ideas that may cause failures in their career.
Compatibility – Best match: sheep, dog, pig; avoid: rat, ox, dragon, rooster, horse

Dragon - 1916, 1928, 1940, 1952, 1964, 1976, 1988, 2000, 2012, 2024, 2036, 2048
The dragon enjoys a very high reputation in Chinese culture. It is the token of authority, dignity, honor, success, luck, and capacity. In ancient China, a dragon was thought to speed across the sky with divine power. Emperors entitled themselves exclusively as ‘dragon’; their thrones were called ‘dragon thrones’, their clothes ‘dragon gowns’.
People under the sign of the dragon are lively, energetic and fortunate. They often can be leaders and try to go for perfection. When they meet with difficulties, they are not discouraged. But they are a little arrogant, and impatient, and women are over- confident. If they overcome these defects, they can have a brighter future.
Compatibility – Best match: rat, monkey, rooster; avoid: dog, ox, dragon, rabbit

Snake – 1917, 1929, 1941, 1953, 1965, 1977, 1989, 2001, 2013, 2025, 2037, 2049
In the Chinese zodiac, snake is listed after the dragon, but its place and the significance as the symbol of worship is far behind the dragon’s. The snake carries the meanings of malevolence, cattiness and mystery, as well as acumen, divination and the ability to distinguish herbs. In some places, people believe that a snake found in their court can bring delight. In Spring Festival, people like to paste onto their doors and windows the paper-cut ‘Fu’ character (happiness), combined with the snake twisting around a rabbit as a popular pattern indicating wealth.
People born in the year of the snake often have a good temper, a skill of communicating, and a gracious morality, but they are likely to be jealous and suspicious. They should be cautious about discussion with others, as that might cause them to lose friendship and opportunities. Women under the sign of the snake do well in housework but are irritable. They might gradually enjoy happiness in their old age.
Compatibility – Best match: ox, rooster; avoid: tiger, monkey, pig

Horse – 1918, 1930, 1942, 1954,1966, 1978, 1990, 2002, 2014, 2026, 2038, 2050
The spirit of the horse is recognized to be the Chinese people’s ethos – making unremitting efforts to improve themselves. It is energetic, bright, warm-hearted, intelligent and able. Ancient people liked to designate an able person as ‘Qianli Ma’ (a horse that covers a thousand li a day).
People born in the year of the horse have ingenious communicating techniques and in their community they always want to be in the limelight. They are active, clever, kind to others, and like to join in a venture career. They cannot bear too much constraint. However they are interested in only the superficial level of an object, neglecting the essence. Once they suffer from failure, they become pessimistic.
Compatibility – Best match: tiger, sheep, dog; Avoid: rat, ox, rabbit, horse

Sheep – 1919, 1931, 1943, 1955, 1967, 1979, 1991, 2003, 2015, 2027, 2039, 2051
The sheep is among the animals that people like most. It is gentle and calm. Since ancient times, people have learned to use its fleece to make writing brushes and skin to keep warm. As it is white, people describe delicate and precious white jade to be ’suet jade’. Thus it is close to the meaning of good things.
People under the sign of the sheep are tender, polite, filial, clever, and kind-hearted. They have special sensitivity to art and beauty, faith in a certain religion and a special fondness for quiet living. They cope with business cautiously and circumspectly. In their daily life, they try to be economical. Women born in this year are willing to take good care of others, but they should avoid pessimism and hesitation.
Compatibility – Best match: rabbit, horse, pig; avoid: rat, ox, dog

Monkey – 1920, 1932, 1944, 1956, 1968, 1980, 1992, 2004, 2016, 2028, 2040, 2052
The monkey is a clever animal. People used to compare it to a smart person. During the Spring and Autumn Period (770 BC – 476 BC), the dignified official title, marquis with the pronunciation ‘Hou’, was the same as the monkey’s. The monkey was thereby bestowed with auspicious meaning. It appeared on pictures pasted on the walls and doors to predict good fortune in officialdom.
Most people born in the Year of the Monkey are lively, flexible, and versatile. They love moving and sports. To help others they put their own business aside. When communicating, they do not like to be controlled and have a strong desire to present themselves. In their work, they will show amazing creativity. If they are not impatient and mouthy, they can gain more achievement.
Compatibility – Best match: rat, dragon; avoid: tiger, snake, pig

Rooster – 1921, 1933, 1945, 1957, 1969, 1981, 1993, 2005, 2017, 2029, 2041, 2053
The rooster is almost the epitome of fidelity and punctuality. For ancestors who had no alarm clocks, the rooster’s crowing was significant, as it could awaken people to get up and start to work. Another symbolic meaning the rooster carries is exorcising evil spirits. People used to worship ancestors and believed in fortune telling for a long time.
Roosters are considered to be honest, bright, communicative, ambitious and warm-hearted. They might be enthusiastic about something quickly, but soon might be impassive. They have strong self-respect and seldom rely on others. As most roosters are born pretty or handsome, they might have several loves in their lives, treating each lover seriously. If they can overcome their arrogance, they will make more progress.
Compatibility – Best match: ox, dragon, snake; avoid: rooster, dog, rabbit

Dog – 1922, 1934, 1946, 1958, 1970, 1982, 1994, 2006, 2018, 2030, 2042, 2054
The dog is the human’s friend who can understand the human’s spirit and obey its master, whether he is wealthy or not. The Chinese regard the dog as an auspicious animal. If a dog happens to come to a house, usually the host will be very glad to adopt it, for it symbolizes the coming of fortune. Poodles, especially black poodles, bring more luck. The masters of dogs are not only humans, but the immortal in legends as well. The invincible God Erlang used a wolf-dog mix to help him capture monsters.
One born in the Year of Dog has a straightforward character. In their career and love, they are faithful, courageous, dexterous, smart and warm-hearted. Most women under this sign are appealing but lack stability. Correct this defect and good fortune will come to them.
Compatibility – Best match: tiger, rabbit, horse; avoid: ox, dragon, sheep, rooster

Pig – 1923, 1935, 1947, 1959, 1971, 1983, 1995, 2007, 2019, 2020, 2031, 2043
A pig is not as smart as a dog in understanding human thought. It likes sleeping and eating and becomes fat. Thus it usually features laziness and clumsiness. On the positive side, it behaves itself, has no calculation to harm others, and can bring affluence to people. Consequently, pigs were once regarded as wealth.
People born in the Year of the Pig are honest and frank. They have a calm appearance and strong heart, but they lack patience and independence. As they do not like to talk in a roundabout way, they are thought to be unsociable. Luckily, they are tolerant and optimistic, so not until they become your friend can their virtue, advantages and fidelity to friendship be found.
Compatibility – Best match: sheep, rabbit; avoid: snake, pig, monkey.