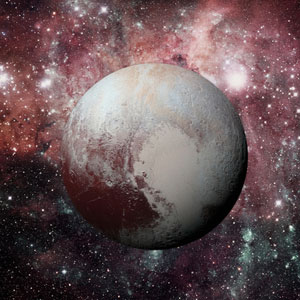 How does Pluto Astrology influence your Natal Chart?

Ah, Pluto! Despite being downgraded to an astronomical dwarf in 2006, dwarf planet Pluto still packs a punch. Since astronomers discovered it in 1930, astrologers have used Pluto to assess one's power potential in a natal chart.

In this article, we will discuss the influence of Pluto in the signs, as well as how one can identify with the corresponding generational effects by Pluto's house placement in the natal chart. Although a Pluto sign places millions of people on the planet, Pluto by house placement is unique and individual to YOU! In your natal chart, Pluto acts in concert with the rest of your planets in geometric aspects. This makes your Pluto placement unique. Define your power!

Pluto Astrology – The Domain of the Taboo

Pluto governs the taboo topics in life. Sex, death, taxes, deep secrets, the underworld, mysteries about the afterlife, and the occult all fall under Pluto’s domain. The more courage one has to deep dive into one’s psyche and addresses these issues, the more power is given to that individual by universal forces.

In an individual who has raised his or her vibration, Pluto’s qualities represent transcendence, transformation, and an ability to achieve anything in life. In a lower vibration, Pluto’s qualities come across as blockages. An individual who has troublesome Pluto aspects may turn to the occult, hidden investigations, and even stalking to get his or her needs met.

Because Pluto possesses a highly elliptical orbit, it can take as few as 12 or as long as 31 years to transit a sign. Ironically, Pluto's shortest transit time occurs in its Zodiac home, Scorpio; its most prolonged transit occurs during Pluto in Taurus, its sign of detriment.  The year 2022 also saw the first ever United States Pluto Return. 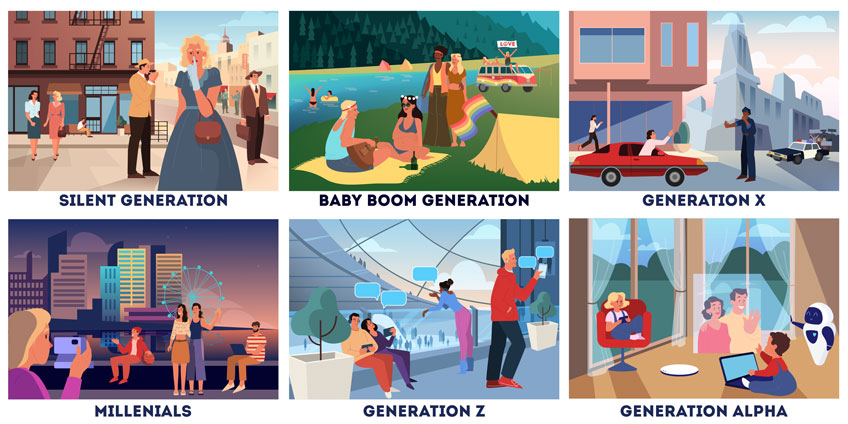 Only a few centenarians are left from this group. Pluto in Gemini was one of the longer transits of Pluto through a sign. The Greatest Generation survived the Spanish Flu pandemic, raised children during the Great Depression, and provided them a sense of comfort and security during World War II. No wonder they earned their namesake! The Pluto in Gemini generation inspired networking and keeping connections with others alive at all costs. The Pluto in Geminids had anti-mask demonstrations similar to today’s protests. We are about to lose a precious gift once the final members of this generation pass on from the Earth.

Growing up in the aftermath of the Great Depression and World War II was hard on these folks. The Silent Generation was the first in recent history to learn the art of being "seen but not heard." As a result, the home environment was especially caustic and explosive, yet a crucible for reflection, empathy, and cultivating one's intuition.

Although the Baby Boomer generation didn't officially arrive on the scene until 1946 when World War II ended, the Pluto in Leo generation roughly overlaps their first cohort. Pluto is exalted in Leo. The Boomers' main legacy may be the inheritances their members leave behind. Due to the ongoing pandemic and war in Ukraine, the Boomers will give their children security as their wealth passes on in a faltering economy.

This little-known second cohort of Baby Boomers called Generation Jones, Pluto in Virgo encompasses the women's liberation movement, concurrent with the Uranus in Virgo transit from 1961-1968. Generation Jones lusted for the abundance of the first Boomer cohort but didn't seem to catch the gold allocated to the Pluto in Leonians. As with the Silent Generation, they became more frugal as a result.

Known as the "latch-key" generation, Xers lost the entitlement of their Boomer predecessors. A certain amount of tenacity and pragmatic insight became their birthright. Generation X witnessed an increase in the divorce rate of their parents, members of the Boomers and Silent Generation. Their insight into legal matters is unparalleled. As a result, they have a strong desire for justice.

Burdened with more student and other debts than any other generation in recent history, Millennials carry the torch of Pluto in Scorpio. In its dominion, those who carry Pluto in Scorpio harness a legacy of transformation through taking the risk of adopting extreme debt to advance in life. The topic of loan forgiveness is a beacon of hope for those stuck in debt's heavy grip.

Many Gen Zs descend from the Generation Xers, who carried a certain cynicism about life. Z takes that to the next extreme, but out of that reflection comes defining one's truth. Many Generation Zs are caught up in esoteric interests such as astrology, philosophy, or spirituality to search for ways of finding the truth that their parents didn't practice. They inspire their Xer parents in their quest for justice. Without seeing one's truth, justice cannot be served.

Alphas were born when the World Order began to change, dematerialize, and crumble. Capricorn is the sign of government and structure; Pluto is the (ex)-planet of demise, destruction, and subsequent transformation. These are the digital age children. Despite declining fertility rates, anthropologists expect Generation Alpha's numbers to number over two billion by 2025. Their Millennial Pluto in Scorpio parents opened accounts for them on social media before they could ever type at a keyboard or own a smartphone.

As this is being written in the year 2022, we are on the horizon of the Aquarian Pluto Age! On March 23, 2023, Pluto enters the Fixed Air sign of Aquarius for a brief period until June 11, 2023, creating a current generational parallel for those with Pluto in the 11th house. Then its uninterrupted 23-year voyage through Aquarius (considered the official start of the Pluto in Aquarius era) starts on January 21, 2024. Pluto will hover in Aquarius, the sign of its fall, until 2044. What will this next Generation be named and experience? Only time will tell!

Pluto Astrology and Your Natal Chart

While studying the effects of Pluto on different generations makes for a fascinating study of history, tiny Pluto can leave a big impression on your natal chart. It can often point us towards any subconscious impulses that affect our lives. To find out how it affects you personally, take a look at which house it is in.

Natal Pluto in the 1st house

Intensity is your middle name. Your identity is shaped by your ability to carve a profound first impression of others. Try to tame your wild vibe when you notice it becoming overpowering. Life is not always about going to extremes.

Natal Pluto in the 2nd house

You may benefit from parents or other relatives who leave you inheritances. This is helpful if you struggle with holding down a job, excessive expenses or debts, or medical conditions that prevent you from working.

Natal Pluto in the 3rd house

You may have a talent for journalism, networking, or mechanical work on vehicles. You have a knack for getting to the bottom of any issue that requires mental clarity.  Your mind won't shut off until you explain the case, find the person, or solve the problem!

Natal Pluto in the 4th house

Nobody saves better or can handle a domestic crisis better than you can!  You are swift, protective, and probing regarding family matters. Financial tendencies may be extreme, or you may suffer from destructive habits such as hoarding. Recognize your positive Pluto potential to channel your healing towards other families that need it in these trying times!

Natal Pluto in the 5th house

When you love, you dive deep! The Fifth House in astrology is all about love, romance, and seeing a higher potential in one's partner. Pluto signifies sexual energy; the two combining here produce dynamite!

Natal Pluto in the 6th house

You are an efficient worker but may tend to become a workaholic if you are not careful. You also tend to be your own worst critic and may turn to destructive and self-harming behaviors if you feel bad about yourself. Channel your love for work into self-love, and you will find your balance!

Natal Pluto in the 7th house

If you feel slighted by life, your natal position of Pluto will not stop before you think justice is delivered. You may go into debt from seeking too many attorneys' opinions on legal matters. Like your predecessors with natal Pluto in the 6th house, learn the art of patience, balance, and waiting for Divine retribution when the time is right.

Natal Pluto in the 8th house

You carry a natural knack to leverage debts like it is money in the bank. You work well under extreme pressure and have an untamed sex appeal.

Natal Pluto in the 9th house

You may engage in crusades to save the world before you finish the one on yourself. Speak your truth, but not before forming a foundation of integrity. Don't force your opinions; just state them.

Natal Pluto in the 10th house

You are obsessed with power, status, and political positions. Cool it off a bit to see that status offers opportunities but isn't everything in life.

Natal Pluto in the 11th house

Give your friends a break! Connecting with other human beings is essential, but the connection within when alone produces the highest insight and wisdom.

Natal Pluto in the 12th house

You have an incredible knack for delving into life's mysteries and wanting to find a concrete, proven answer. Learn to let go and that you don't need to understand everything in this lifetime.  Living with mystery is key to understanding.

Want to learn more about Pluto Astrology, your Natal Chart, and its impact on you and those around you? Speak with an astrologer at Psychic Source today and all will be revealed!

Speak with an Astrologer
Guide to Astrology
Our comprehensive Astrology Guide covers astrology basics, from what is astrology, to the signs of the zodiac, how the sun, moon, and planets impact your life, and much more.
Learn More

Get a Reading with Marcella x4846

Marcella is a third-generation psychic who is talented in astrology, Tarot, and many other divination forms. She has been reading professionally since 2013. She has a background in healthcare with a pharmacist degree, earned in 1997. Marcella has used her healthcare background to better understand spiritual healing through the chakras and healing one's aura. She is still recovering from a near-death experience in 2016 that placed her on a transplant list. Divine intervention prevented her from needing a transplant. When not working on Psychic Source, Marcella is caring for her pet, engaging with her two children, and volunteering at her daughter's grade school.

Sex and the Zodiac: Traits, Star Sign Compatibility, and More

Which zodiac signs are most compatible? Which signs are best in bed? Learn about sexual astrology and the traits of each sun sign, and find your astrology match.