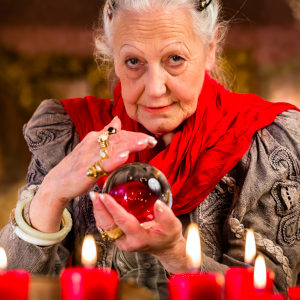 Hollywood doesn't always get it right with its psychic movie characters.

Although Hollywood likes to use psychics in some of its movies, it doesn't always get things right. Read on to learn more about some famous psychic movie characters from Hollywood movies, what the film got wrong, and what psychics are really like.

Perhaps one of the most famous psychics from the silver screen is Tangina Barrons, who was portrayed masterfully in the movie "Poltergeist" by Zelda Rubenstein. Barrons is a powerful psychic who can sense the frequencies of spirits and read minds. When a main character challenges Barrons to read his thoughts, she surprises him by succeeding. However, most psychics can't read your mind. Instead, they read energy and feelings.

Actress Summer Glau plays River Tam in the film "Serenity." River is an intellectually gifted young woman whose parents send her to a government learning facility known as "The Academy" for what they think is advanced education. However, the facility ends up experimenting on her mind and giving her the ability to read thoughts. She can also kill people with her mind.

Of course, Hollywood gets this one very wrong since real psychics can't hurt people with their mind. However, an online psychic can help you if you have questions about the problems you face in your life.

Charles Francis Xavier, better known as Professor X from the long-running X-Men comic book series and movies, is the most powerful psychic in the world. He can manipulate and read the memories and thoughts of others and control people with his mind. Once again, he can even kill another person just by thinking about it. As you can see, Hollywood just can't seem to leave this psychic trait alone even though it's clearly wrong.

George Clooney stars as Lyn Cassady in "The Men Who Stare at Goats," which is a comedy about the U.S. military's secretive New Earth Army. In the movie, the military recruits and trains psychic soldiers. Cassady is thought to be the best psychic in the program, and he even uses his gift to kill a goat by stopping its heart.

Obviously, psychics would never use their power to harm an animal. However, pet psychics can help you communicate with a pet that has passed away.

After an accident with a bathtub and hairdryer, womanizer Nick Marshall, who is portrayed by Mel Gibson in "What Women Want," is suddenly able to read minds. However, psychics will tell you Hollywood gets this one wrong because Nick can only read women's minds. Once Nick learns his lesson and realizes he should respect women, he also loses his power.

Hollywood loves to stretch the truth, and its movies about psychics are no exception. While Hollywood portrays psychics as having superpowers, most are simply ordinary people with heightened intuition and clarity.