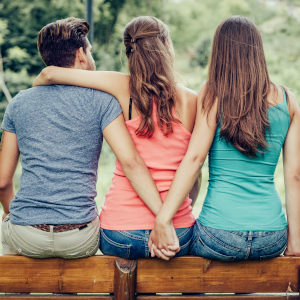 The traditional relationship dynamic that involves a monogamous couple has changed over the last few years. Today's relationships involve unique dynamics, potentially with additional people involved with one another. Take a closer look at some of the ways the modern relationship has shifted.

A throuple involves three people who are involved in a relationship with one another. You may also hear it called a threelationship. It can include any combination of genders, depending on the orientation and interests of those involved. “Shameless,” a popular program on Showtime also featured a throuple at one point. When involved in a throuple, all three partners are generally romantically involved with one another equally, which is one of the ways this relationship dynamic differs from polygamy. Oftentimes, a couple meets another person and one or both members of that couple develops feelings for the new individual.

Swinging hasn't always had a positive connotation, but it's something that works for many relationships. Swingers are open to new sexual experiences with others, so one couple can swap partners for a romantic encounter. In some cases, swingers stick to simply swapping couples, as in one man will have an experience with the woman in the other couple and vice versa. Other swingers may look for people that appeal to the individuals in each couple by attending swingers' parties, clubs, and other events.

Someone who is considering an open relationship might benefit from consulting with a love psychic who can provide insights into whether this would work. Those who struggle with jealousy or other similar concerns would likely not be very happy in this type of relationship.

Polyamory is similar to the idea of a throuple, although it can involve more partners. This dynamic is one where both men and women are open to having additional romantic or sexual partners within a relationship. It differs from polygamy in that typically polygamous partners do not interact with one another romantically, aside from the one relationship. For example, a man might have multiple wives, but the wives do not have romantic relationships with each other. In polyamory, all involved partners can choose to be romantic with one another, or they may potentially look outside the relationship for additional fulfillment.

These relationship dynamics may seem different to you, but they're offering more fulfillment to many individuals and partners around the globe. Consulting with an online clairvoyant can help you determine what type of relationship can help you feel fulfilled and happy.