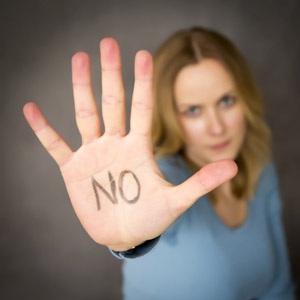 Learn how to say &quot;no&quot; to your children now to raise happy, healthy adults

“No” is one of the first words children learn, yet making it part of your parenting vocabulary can be so difficult. As if saying it to your precious angels wasn’t tough enough, then you’ve got to make them understand what those two powerful letters mean. However, saying “no” effectively is the key to setting the boundaries your children need to become successful adults. Read on to learn how to use this small but important word.

Very young children don’t understand verbal language but can pick up on physical cues. For example, they can understand a look of pain or alarm on your face. Later children might understand a hand raised in a “stop” motion or a shaking head. Use body language to reinforce the word “no.” This is especially effective if your child is used to positive body language, like friendly eye-contact and cuddles, as the “no” actions are a dramatic contrast.

Many parents struggle to say “no” effectively because they fear the fall-out. Worries of tantrums and tears prevent them from saying “no” assertively, and in some cases saying “no” at all. They start saying “yes” instead of “no” because it’s easier in the moment. However, these parents continue to struggle with bad behavior because they never correct it.

If you’re one of these parents, you should remember your job is to set limits for your children, not control their reactions. Once you make peace with this idea, you’ll find it easier to say “no.” You’ll start saying it more often, and with more confidence. You’ll start focusing on the “no,” the part you can control, and become better at it. Children who aren’t used to hearing that word may act out for a while, but once they realize your resolve isn’t wavering they’re likely to fall in line.

After too many “nos,” children can start to switch off. If you’re feeling like a broken record, it might be time to vary your vocabulary.

Rather than saying no to a second helping of cake, you might acknowledge that cake is tasty but remind your children it’s not healthy. If your daughter is toppling her brother’s block towers, you might tell her blocks aren’t for knocking and that you’ll teach her how to play with them. If your son is hitting his cousin, you might remind him that it’s not nice to hit and he should be gentle.

Think about the message behind your instinctive “no,” and communicate it better.

4. Figure Out Your Relationship with Your Children

If you’re still not finding satisfaction, it may be time to dig a little deeper. An authentic psychic can help you learn more about your relationships with your children, and why you’re struggling to set those boundaries. If you’re a busy parent, you can even have a chat with a psychic online to discover more about the dynamic you have with your kids and plan strategies for effectively saying “no” to them.

Saying “no” to your children can be daunting, but it’s a vital skill for effective parenting.