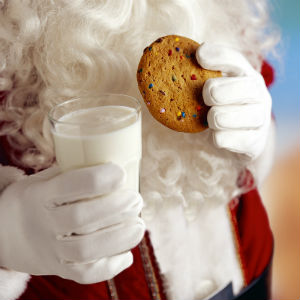 Only the best for Santa!

Memories of Christmas Past

Santa, the magical elf with the big full bodied laugh, enjoyed a cocktail. Or at least that was what my sister Maura and I believed. While other children left milk and cookies out for the delightful Old Saint Nick, my mother always suggested that a martini would be a perfect gift for Santa. After all, he had spent most of the night already passing out gifts; didn’t he deserve a good jolt?

My sister and I were very young, and we didn’t know anything about a “good jolt,” but we did know that disagreeing with Mom in December could  potentially knock out several choice gifts from our list. Santa was, after all, watching all the children of the world in a most Orwellian way.

But it bothered us that we were not able to see the mythical disappearance of cookies that our friends always talked about. Our mother said Santa was on a diet. Santa, she said, needed to stop eating all those cookies before he became too big to fit into his shiny red suit. She then reminded us that Santa was in a one horse open sleigh flying around the world in December. Why on earth would he want cookies when he could enjoy the warming effects of vodka? So a martini (no olive—again, he was on a diet) was placed on the coffee table near the twinkling lights of the Christmas tree, and off we would go to see all the beautiful lights in our neighborhood with visions of sugar plums dancing in our little blonde heads. We just hoped Santa didn’t have too many martinis if he needed to set something up, like the Barbie Town House or some other type of “some assembly required” toy.

(If you are wondering why we didn’t go to sleep with visions of sugar plums… well, I was about five, our family began opening presents on Christmas Eve. That way, potentially – I’m not admitting to anything here – a precocious five-year-old would not open all her presents before everyone else woke up on Christmas day and claim that “Santa left them that way.” I was an adorable child.)

So we would all get in the car, prepared to see the magic—and often times the horror—of the neighborhood lights, when our mother would “forget her purse” and have to run back to the house to get it. About 15 minutes (which roughly translates to 3 hours for children) later my Mom would come back to the car, pink in the cheeks and grinning. Even as children we knew that Mom loved Christmas time more than anyone else in the whole wide world.
Mom’s exuberance for Christmas was only matched by her creativity. One Christmas morning we woke up to find reindeer hoof prints on the kitchen floor and carrots with nibbles missing. Every year we would sing carols, make sugar cookies from scratch, decorate the cookies—all while listening to a compilation of Christmas music we like to call the “skippy tape.”  Mom had collected the songs for her holiday cassette long after the original records had started to age and skip. So cheerful holiday tunes jolted from verse to chorus in a most hilarious way. Imagine Nat King Cole singing “… and so I offer you this simple-- although it’s been said many times many ways-- to you.” This sends my sister and me into fits of laughter to this day.

After Mom finally returned to the car, purse in hand, my dad would drive really slowly around the city, singing carols in his boisterous baritone and pointing out each house and their display of sparkling lights. When we returned home, we always found that Santa had come and gone. In his wake he left piles of presents and an empty martini glass. It never occurred to us to equate Mom’s pink cheeks to the rather dazzling display of gifts.

And if the to/from card atop each present from Santa had a familiar script, we didn’t notice in our great zeal to get to our presents. Of course, in our family having zeal was fine; attempting to open the presents "like an animal” was another thing entirely. Our family opened each of the presents individually; none of this“group rip fest” for us. It would be way past our bedtime before we were done meticulously opening all the gifts. With gifts from Santa, our parents, and Grandma Jo, unwrapping presents was a monumental task. Our Grandma was not only a tape-happy present wrapper, but she also enjoyed wrapping everything from a sweater to a bundle of socks in festive paper. We would easily find ten presents under the tree from Grandma Jo. It would take us a good five minutes to open one of Grandma Jo’s gifts as she would tape the present so securely that we grunted in order to garner the strength to rip open the paper. This easily added an hour to the “unwrapping” event. But in the end, surrounded by toys, we each had a huge smile on our face.

As I look upon my childhood it occurs to me just how magical the holidays really are for children. I can’t remember the countless hours my sister and I would stay up at night giggling and trying to guess what Santa would bring us, both of us in matching night gowns and tousled hair. I do know now that we did not miss out on anything by not leaving cookies for Santa. We still had our “empty cookie plate” thing. It just involved a glass and a really good grade of vodka. Only the best for Santa, after all. 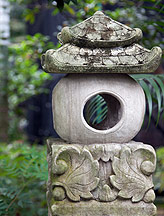