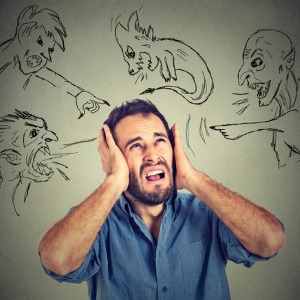 You can learn to filter useful suggestions from mean-spirited criticisms.

No matter who you are, it’s hard to hear criticism. It’s always painful when you’re faced with something you could perceive as a personal attack. However, you can draw some positives from criticism, too. Learn to differentiate between purely malicious words and those that might have some merit. That way, you can learn from criticism instead of just viewing it as something always negative.

Though criticism never feels good, you can use it as a learning tool. In some part, most criticism is based on truth. Though it seems — and certainly feels — negative, criticism presents the opportunity to learn from and even use these suggestions to improve.

Most of the time, we only value receiving praise. Kind words, understandably, boost our happiness. On the other hand, criticism makes us feel miserable. But only getting insincere praise would mean we couldn’t make progress. Invite constructive criticism to inspire development and improvement, and learn to appreciate these suggestions. A psychic chat online can help you pinpoint valuable criticism.

Respond to Suggestions, Not Tone

Once you accept that criticism may offer valuable suggestions, you still have to decide how you will respond to the tone. Often, we hear a negative tone and respond to that instead of the suggestions. We should learn to separate criticism from the style in which it’s given. Even if criticism is presented in a confrontational way, we need to try to detach the emotion from useful suggestions that can hide in anger. Look beyond an angry tone to better yourself.

While criticism often has value, even if delivered in a negative tone, sometimes it’s just done maliciously. The key is learning to differentiate. It’s painful to hear criticism that isn’t justified at all. In some way, though, it’s easier to deal with that type of criticism. Assess whether you’re hearing something that could have some truth, or if you’re just faced with someone trying to bring you down. A psychic phone reading can help you figure this out. When faced with false criticism, remain detached so you don’t give the criticism more energy. Silence maintains dignity, which in the end leads to more respect.

Take Your Time to Respond

Take a moment before you respond. If you respond immediately, you’ll likely say something you don’t mean or that you’ll regret later. Wait some time before responding so your pride doesn’t get in the way of a constructive conversation. Instead, wait patiently and take some time to reflect. You’ll have the chance to consider if you can learn something from the suggestions and avoid causing greater conflict.

Criticism never feels good. That said, you can use criticism to better yourself. Often, criticism will contain some truth, so learn to draw that out to drive yourself to improvement. Ignore criticism that isn’t helpful, and take your time to respond so you can do it calmly and without anger. It’s also helpful to add a smile to defuse the situation. You’ll feel better and have the chance to reflect and grow.