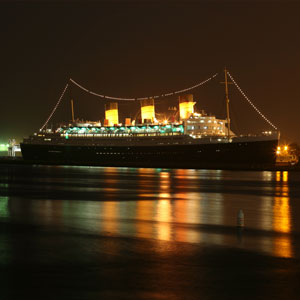 The beautiful Queen Mary has a rich and spirited past worth exploring. 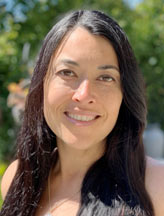 Get a Reading with Raquel x9488
The Queen Mary is a majestic, art deco style ship from the grand old ocean crossing days. Construction began in 1930, and she was the jewel of the Atlantic. Celebrities, Royalty, and the plain ole wealthy graced her decks as she stylishly crossed the North Atlantic. At twice the size of the Titanic, she was a floating fortress of luxury. When World War II broke out, she traded her classic black, white, and red paint for a plain, flat grey.

She was now enlisted in the war effort and was given the new moniker of “The Grey Ghost”. Over the course of the war, she transported over 16,0000 troops, and ran countless missions. Only a few of those missions ending in disaster. One of the most distinguished wartime passengers was none other than the man himself, Sir Winston Churchill. In what is now known as The Winston Churchill Suite, he signed the order for D-Day.
Touring the Majestic Queen
When I toured this now grand old ship, I was in awe of the history and the majesty of her historic decks. The beautiful Queen’s Salon, the art deco style architecture, the explosion of history around every corner took my breath away. But truth be told, I was not here for a history lesson, I was here for the ghost stories.
My first encounter threw me for a loop. We had entered the engine room in the bowels of the ship. I noticed a little girl with blonde hair in pigtails, a pale blue dress with ruffled sleeves, around the age of 5 or 6 peaking around the room. I knew she was not of this world, and it took me by surprise. I had originally hoped to see the spirit of the sailor who was crushed in the watertight door, but she would suffice. I told my date, who was skeptical of my gift and the spirit world, about her. I explained my confusion and told him she doesn’t belong in this part of the ship. She was curious about us but kept her distance.

We were then guided into a huge, dark open space which once housed an enormous engine. The tour guide then explained that the most commonly seen spirit in this area of the ship was that of a little blonde girl. Her origin is unknown, and she did not seem interested in communication. Feeling vindicated, my then date and now husband is no longer a skeptic, but a believer.
An Evil Presence
As the tour progressed, we entered the first-class indoor pool. This location is a hotbed of paranormal activity. The women’s dressing room is the main source of energy in this part of the ship. The narrow corridor is long and dark. Dressing rooms with no doors line the walls. The air is thick, and hot. The feeling of anxiety fills my soul. Someone or something is causing a constriction in my throat and a tightness in my chest. A vortex seems to have taken shape in these ancient changing rooms.

As the tour guide challenges us to each take a room and sit in the darkness, fear fills my heart. The oppressive energy takes hold of me. He is not a positive energy. I feel as though he can reach out and grab me. He is angry, and foul. You couldn’t pay me to spend another minute or night in that small, cramped room. To my relief, the tour guide urges us to continue, and I exit the room. I regain my composure and say nothing to my partner of what I experienced at this time.
A Second Lost Soul
The group walks out to view the swimming pool devoid of water. We are allowed to roam around and check out the design of the dimly lit pool room. I feel the air shift again, and a cold air pocket developed to the right of me I feel a small child grasp my hand and hear her call out “mama?”. As I looked down, I realized I have come across another lost little girl. Not to be confused with the “Engine room Blondie”, this girl was slightly younger. I did not see her but felt her grasp and heard her speak. There have been reports that several people may have drowned in the pool during her tenure as an ocean liner. She may have been one of the victims, still reaching out and searching in vain for a mother.
Other Famous Haunting Tales
We set off around various parts of the ship. The energy of this ship is intense. I hear different stories of hauntings around the ship. One of the most famous haunted tales of the ship is the banging on the side of the haul that is heard from the engine room. During the war, The Grey Ghost was put on radio silence to avoid U boats. A sequence of maneuvers was choreographed for a fleet of ships crossing the Atlantic from New York to Gourock. She was carrying 15,000 American servicemen when she collided with the HMS Curacao. The Curacoa (D41) had broken formation and more than 300 men perished. Legend says they banged on the hull of the ship, desperately begging for their lives. Their screams and pleas can still be heard.
Another tale is that of room B340. Stories of paranormal activity in this room can date back to the final cruise in 1967. Reports of phantoms knocking at the door, lights turning on and off, bathroom fixtures burst to life with no one in sight, and a dark shadow that appears at the foot of the bed. When I was aboard the ship, the room had been closed off because of the activity. Originally, the room made up 3 third-class rooms. The rooms were remodeled to make one large suite. It had been used as an office, a hotel room, a storage room, and then left vacant for several years. No one would stay the entire night in that room, and no one wanted to use this room as an office. The room was completely bare. No carpet, no beautiful elaborate wooden walls, not even a bathroom. Just an empty desolate room.

The energy of the room was electric. You could feel the presence of not one, but three entities staring you down. I felt like I was invading someone’s sacred space. Not welcomed in that room, I respected their privacy and exited. Today, you can reserve room B340 and stay the night. It is no longer bare but made into a fully furnished suite.
The Queen Mary will always remain one of my most favorite places to ghost hunt, and my favorite ship to visit. Each time I journey aboard, I find I encounter someone new and I make sure to say hi to the spirits I’ve met before. If you feel brave enough to walk amongst her haunted halls, they offer tours and host a full-service hotel.
Ghost hunting is always encouraged.