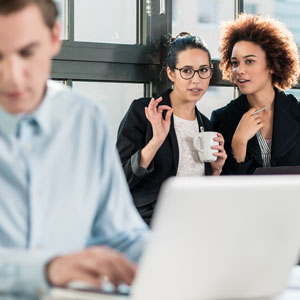 Forming friendships at work is a great way to build a professional community, but when cliques begin to form or gossip starts to swirl, your workplace can become toxic quickly. Dealing with mean girls can seem like an impossible feat, but following this guide can help you cope with office gossip and politics.

Know the Difference Between Chitchat and Gossip

First, it's important to know the difference between casual chitchat and harmful gossip. If you overhear a co-worker questioning your performance on a work project, it may be idle conversation. If the co-worker expresses delight that you were removed from a project team or says something personally demeaning about you, it's gossip. If rumors begin to spread, it's almost certainly gossip.

Don't wait to stop gossip in its tracks. As soon as you overhear it or learn about it from someone else, communicate with the offending co-workers directly. Rather than taking an aggressive approach, confront them in a straightforward but non-hostile way. Even if you're offended, keep your emotions in check as you calmly explain what you overheard and why it isn't OK. An empathetic approach can help as you ask your co-workers to refrain from gossiping.

Do Your Best and Have a Positive Outlook

After your initial conversation, do your best to put the interaction behind you. After all, as any authentic psychic can tell you, dwelling on the issue won't change anything. Instead, concentrate on putting your best foot forward and doing your job as if nothing ever happened.

If you sense your co-workers are continuing to talk behind your back, take care not to respond with negativity or retaliation. After all, they're probably seeking a reaction, and if you give them one, they may respond with more gossip. Instead, maintain a positive outlook and focus on doing great work.

While you don't want to let mean girls in the workplace keep you from doing your job, networking with your colleagues, or building a strong connection with your boss, keeping your work-related relationships professional can help you avoid some of the most problematic office politics. Rather than going out for happy hours or letting loose at company functions, strive to keep things work-appropriate to stay above the fray.

Although you should always try to communicate directly with difficult co-workers rather than complaining to your manager, you shouldn't hesitate to involve your office's human resources team if you can't resolve the issue on your own. It's especially important to talk with your HR team if the gossip has started to turn into harassment, if it's affecting your ability to work, or if your office's mean girls have violated part of your company's code of conduct. For best results, keep documentation of any incidents and have witnesses who can support your story.

Office politics can cause serious friction in the workplace, but taking steps to stop it in its tracks and maintain a positive yet professional approach can help. Whether you want to vent or you want an unbiased opinion, the best online psychics are always available to guide you through a challenging situation.

VictoriaInTears: Do men not gossip? Frankly I find them a lot more catty