Can AI Predict the Future? Is Artificial Intelligence Psychic?

Can Artificial Intelligence Predict The Future?

Massive new AI models like Dall-E 2, Midjourney, Stable Diffusion and GPT3 are emerging as disruptive new tools for creativity, art, and exploration of the human condition. Trained on billions of words and images, models like Dalle-E 2 or Midjourney can generate images of nearly any style, depicting almost anything imaginable based on a simple text description.

When a model has been trained on what is essentially The Entire Internet, it isn’t hyperbole to say their outputs represent a type of hivemind, or an amalgamation of the near totality of human knowledge.

Given the breadth of training data, could these models have picked up on subtleties that might give them prognosticating powers we might not expect? Could today’s AI have some of the same advantages as say Swarm Surveys (A hivemind model for interactive predicting that shows surprising efficacy)?

Recent news has shown that future prediction with AI is feasible. In fact, much of the impetus for the development of AI is to help humans be as predictive as possible about the future. From stock trends to economic modeling and self-driving cars, guessing correctly what may happen next provides immense value.

While it might be difficult to prove that current AI displays psychic abilities, it is fascinating to test the ways it attempts to model the future. Furthermore, it may be through AI research that we get a better understanding of the psychic and future predicting powers of humans. After all, as Arthur C. Clarke famously said: "Any sufficiently advanced technology is indistinguishable from magic."

To explore this topic, we’re asking Dalle-E 2 and Midjourney, the two most powerful text-to-image AI’s, to predict the future. Not just any future, but our political future, by making predictions on future American Leaders. Here is what they had to say:

Our Political Future, According to State of the Art AI

The following images were generated with Dalle-E 2 and Midjourney. Prompts used to generate the images are given below each image. The generated images were selected from the prompt without reruns or cherry picking. The first image is from Midjourney, the second from Dalle-E 2 in each set.

Official Photo: The 78th President of the United States 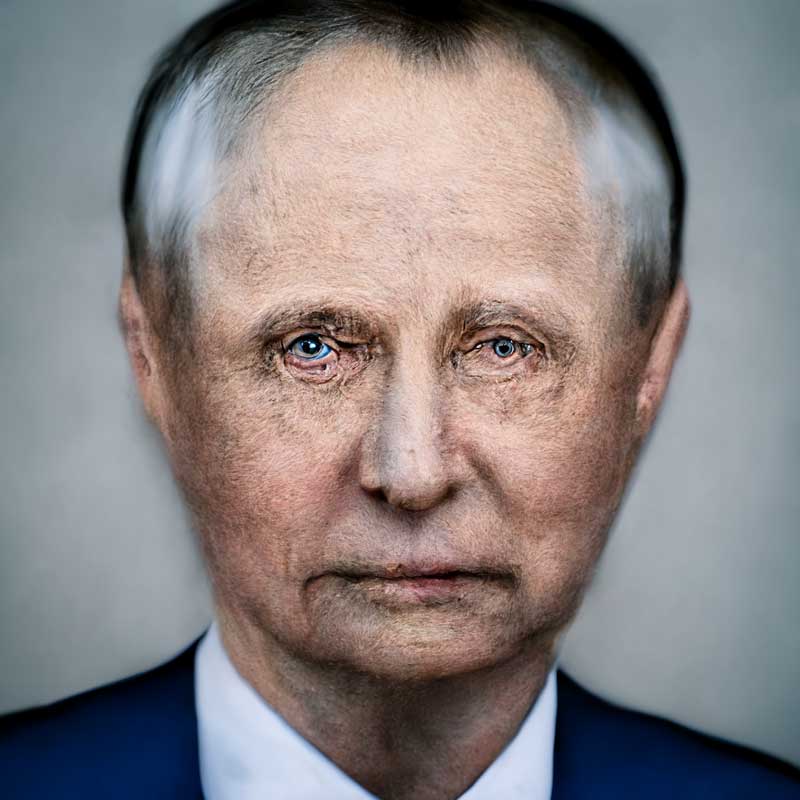 Fascinatingly, Midjourney gave us someone with a strong resemblance to Putin… 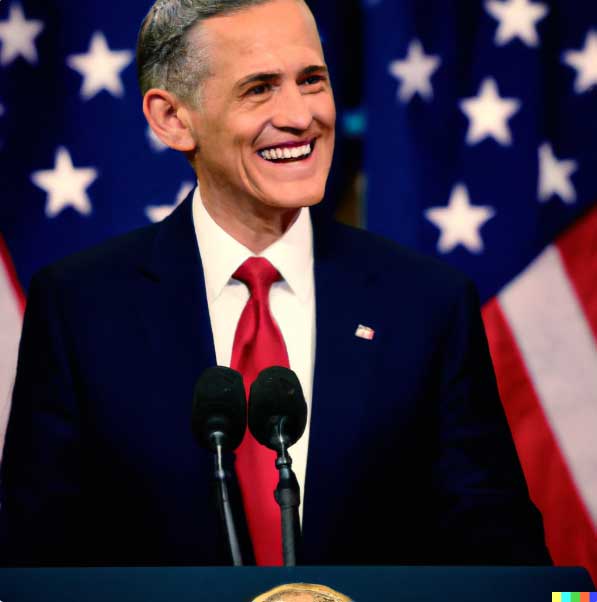 Dalle2 predicts someone who frankly resembles a caucasian Obama. 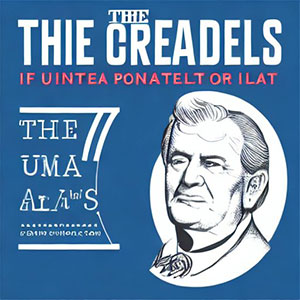 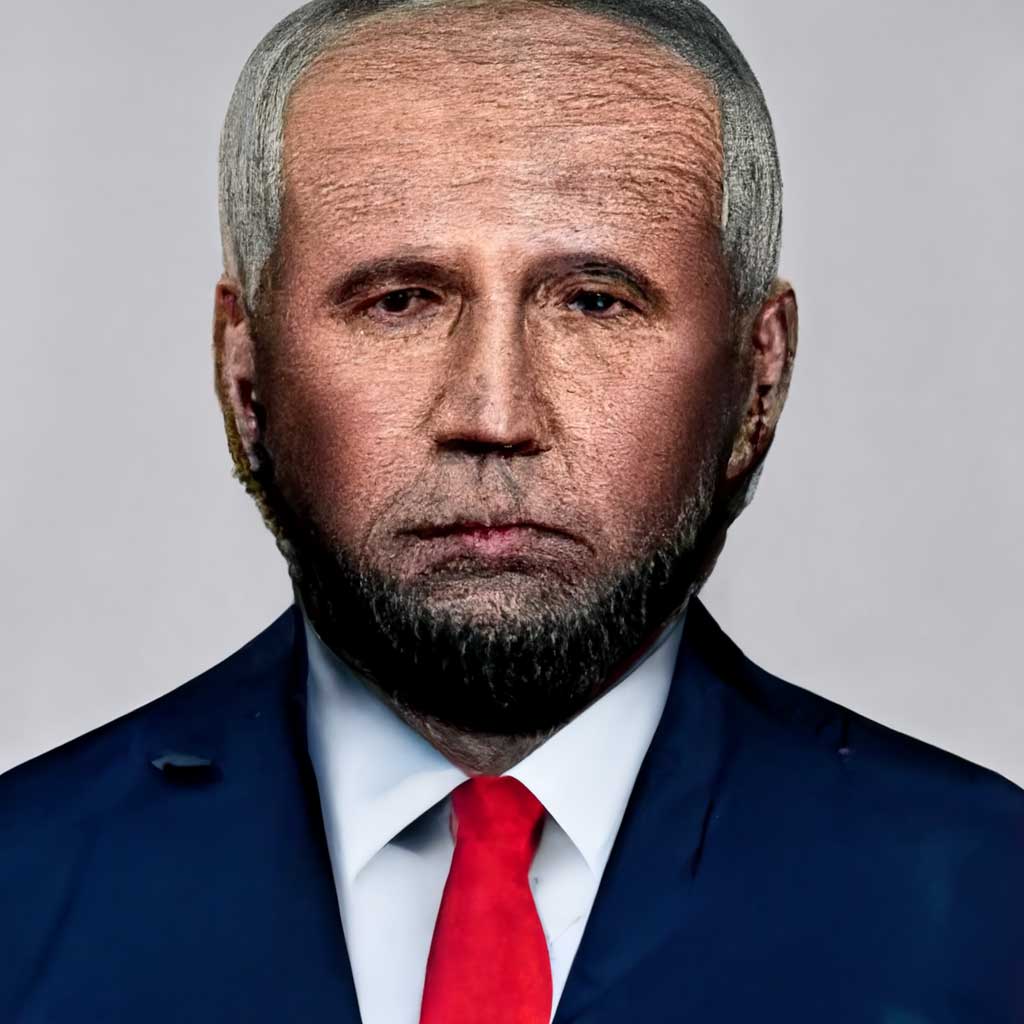 Here Midjourney intuits someone with Mike Pence vibes, but a very clear difference in the strong neckbeard. Hmm. 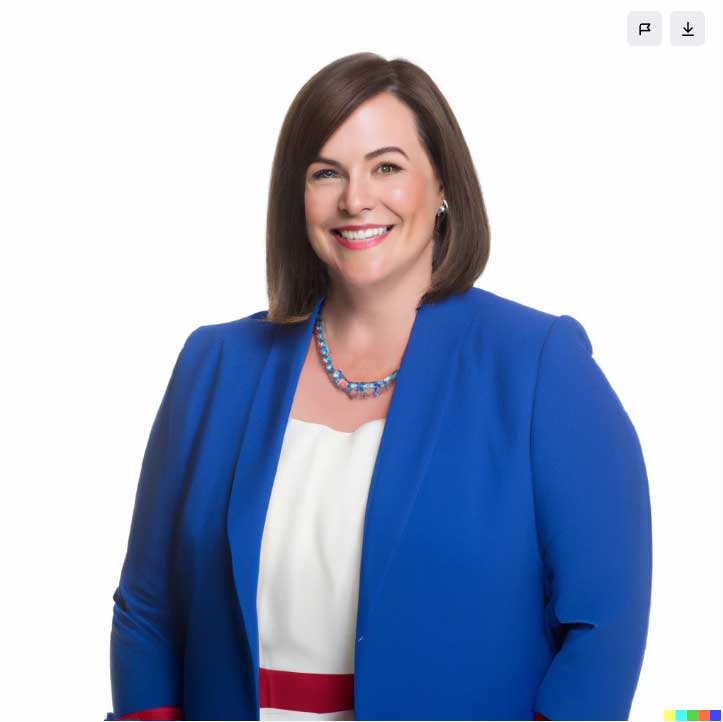 Dalle2 predicts a female VP in 2024, with an interesting resemblance to Amy Klobuchar 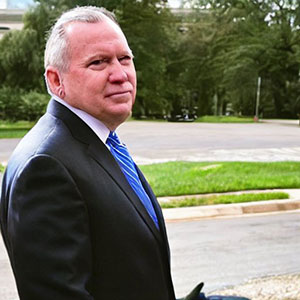 Stable Diffusion gives us another generic white male. Does this man look like anyone we’ve met before? 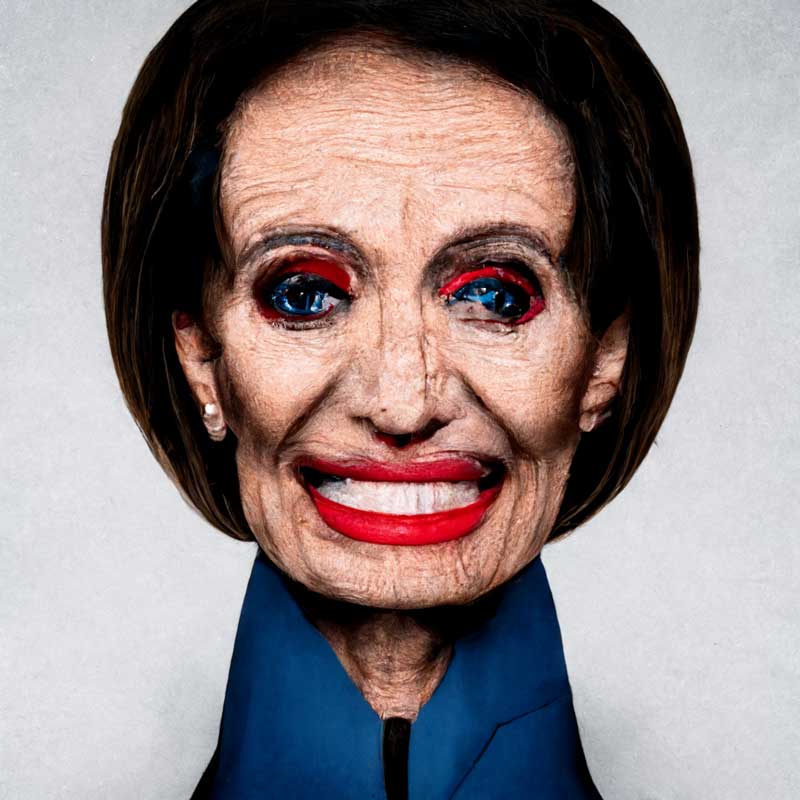 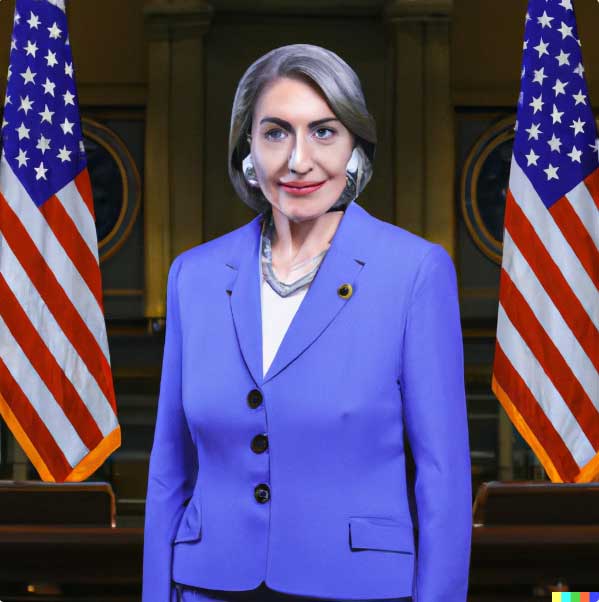 Dalle-2 seems to think a woman will be speaker, but who this woman is remains unclear to us. 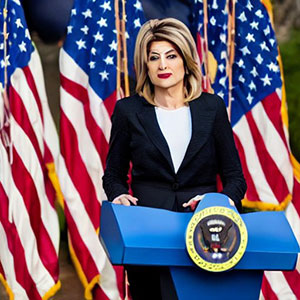 Like the other models, Stable Diffusion predicts a woman. Perhaps this should be called the “Pelosi effect,” pointing to the bias of AI’s to repeat what they’ve seen.

Official Photo of the Senate Majority leader of the year 2024 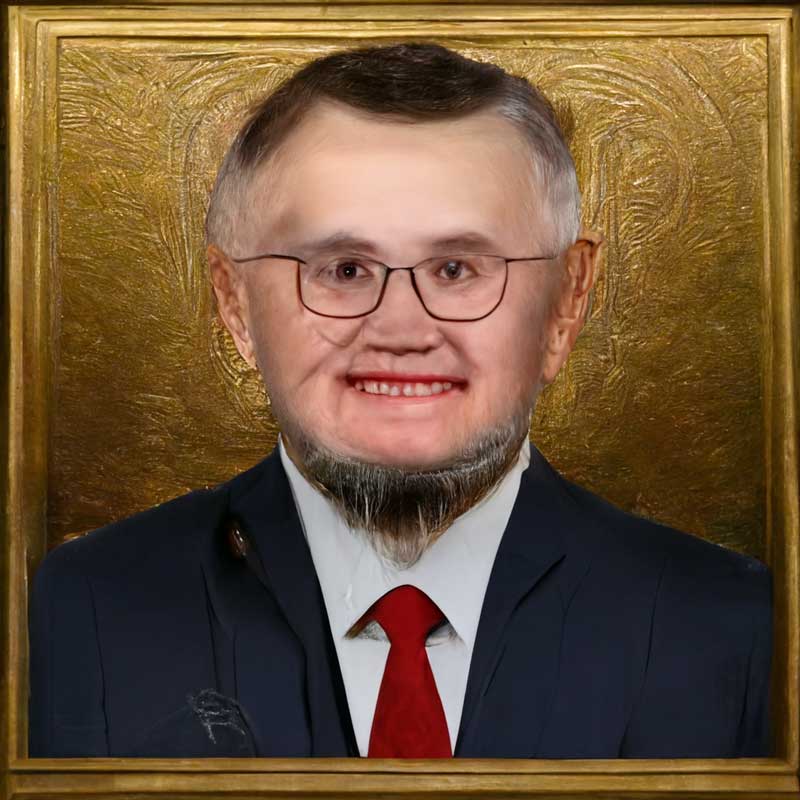 Midjourney gives us an interesting new Senate Majority Leader in 2024, apparently neckbeards become quite popular in the next few years amongst the ruling elite. 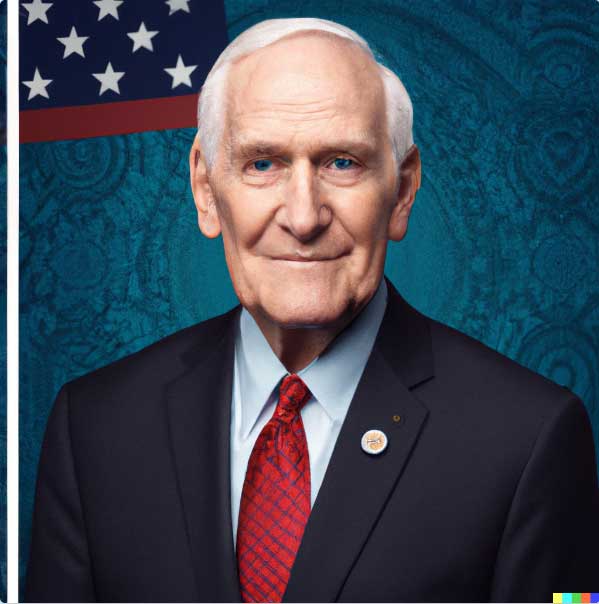 Dalle2 gives us this man for Senate Majority Leader. Generic older white male. Does this look like anyone you know in politics today? 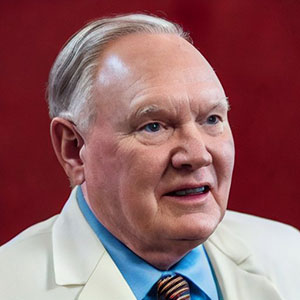 Not surprisingly, Stable Diffusion predicts what appears to be a white male in his seventies.

Official Photo of the Senate Minority leader of the year 2024 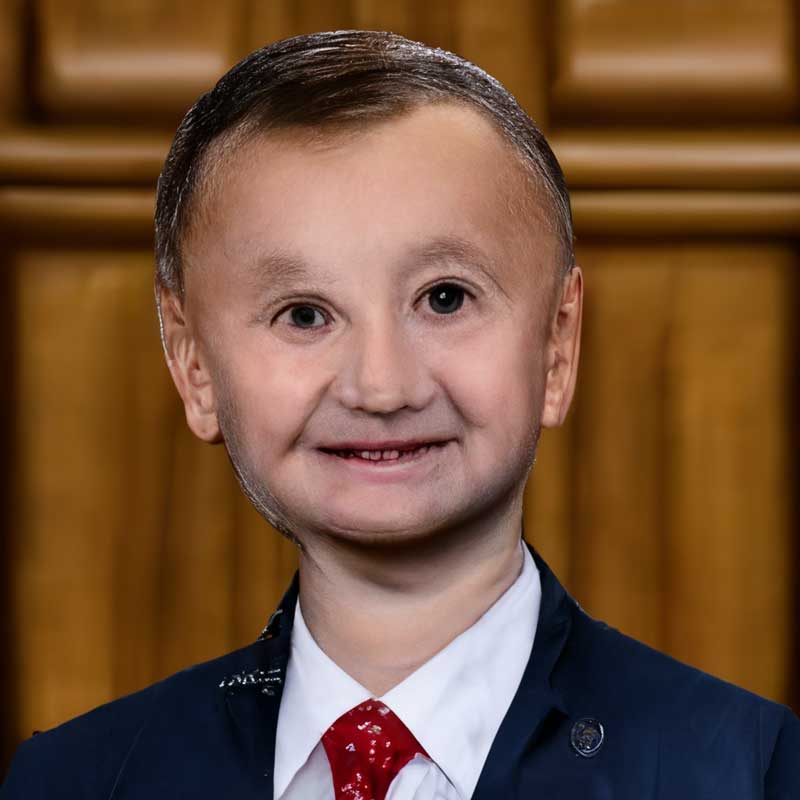 Looks like Midjourney thinks our next Senate Minority Leader will be a balding man-child. That feels about right. 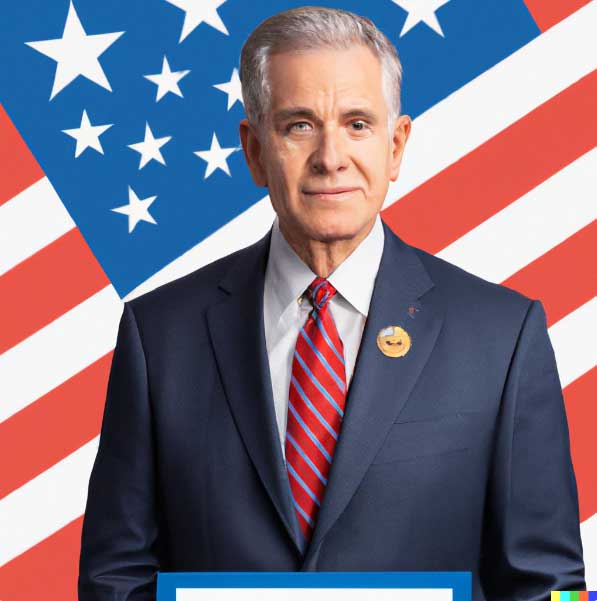 Dalle2 Gives us this patriotic fellow. More older white men. This one, however, seems to have a bionic eye? First cyborg politician confirmed?! It’s also hard to deny the resemblance to President Biden – maybe there is a new job in his future? 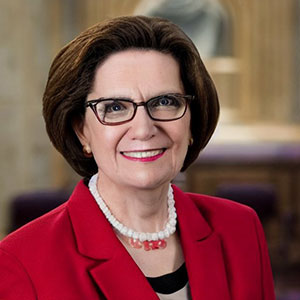 A departure from the other models, Stable Diffusion predicts a woman as Senate Minority Leader. Pearls must be part of the uniform. 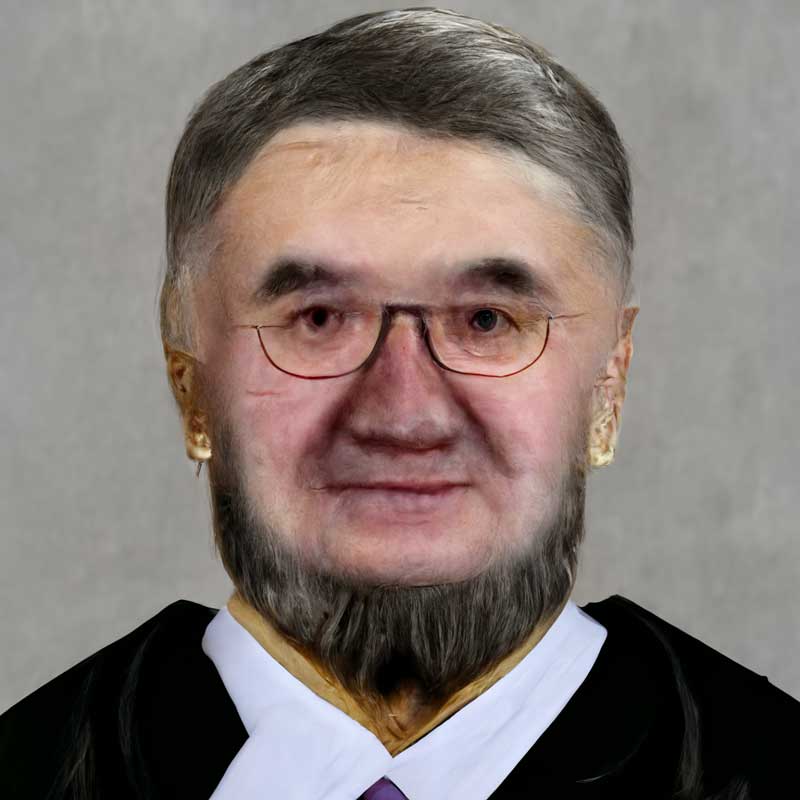 Midjourney continues to predict the popularity of neckbeards for public figures in 2024, giving us this person as its prediction for the next new Supreme Court Justice. 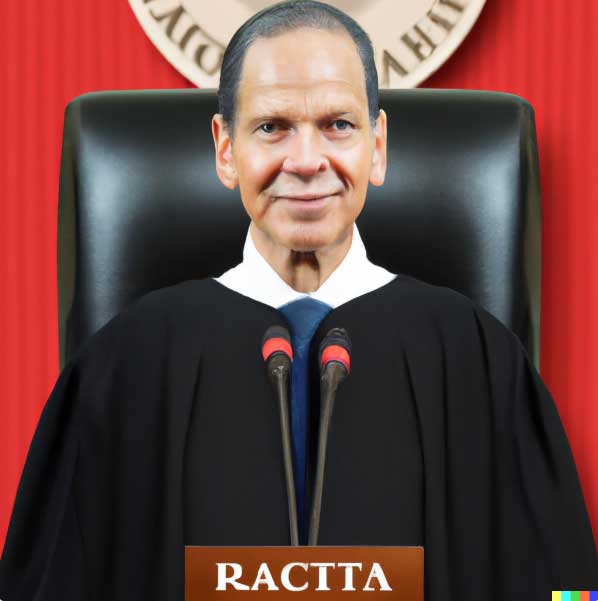 Strangely, Dalle2 actually gives us a name in this case. “Ractta” sounds… conservative. 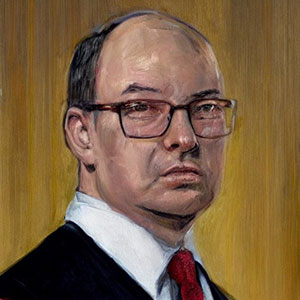 Another white male, this time with glasses. Stable Diffusion gives us an oil painting of this influential new figure.

Who Does AI Think Will Influence the World the Most?

Switching gears slightly, we asked Midjourney and Dall-E 2 to give us some additional predictions. This time not of politicians specifically, but of individual people who will make an outsized impact – people who will single handedly impact the world on a large scale. To get at this prediction, we used prompts asking for “Time's Person of the Year” photos for a number of years. The modifier “Photo by Martin Schoeller” improved the image generation because Schoeller’s style is close up face portraits, allowing us to narrow the stylistic focus.

Time Magazine’s “2024 Person of the Year” Photo by Martin Schoeller. 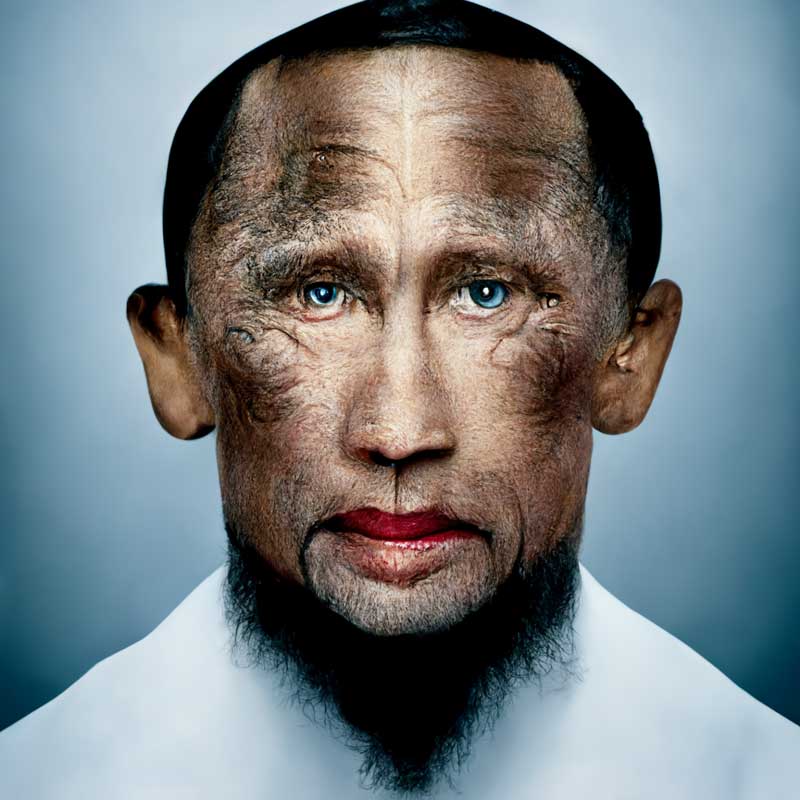 Midjourney gives us a powerful and determined looking Black Man for Person of the Year 2024. Anyone know who this could be? 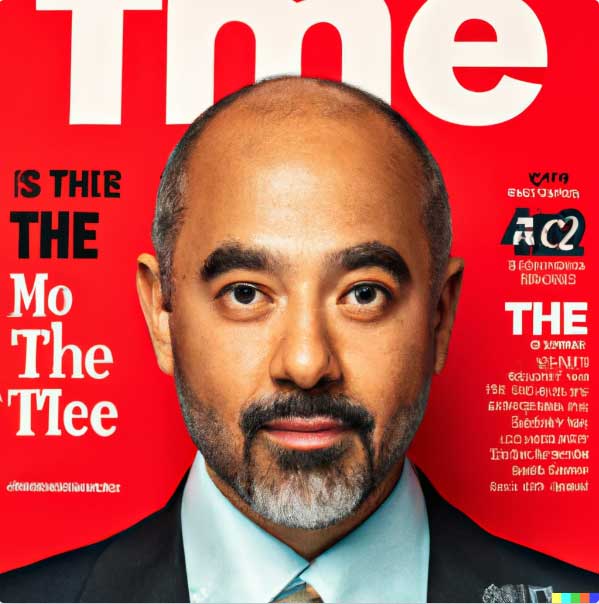 Dalle2 gave us this man, complete with the magazine cover background and mostly indecipherable text. Can you find any clues within the image? Does he look like anyone? 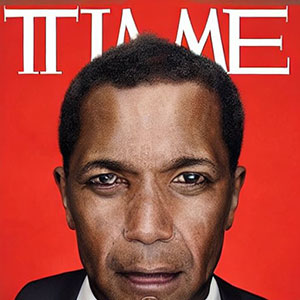 Stable Diffusion keeps up with the trend of predicting a non-white “2024 Person of the Year.”

Time Magazine’s “2050 Person of the Year” Photo by Martin Schoeller. 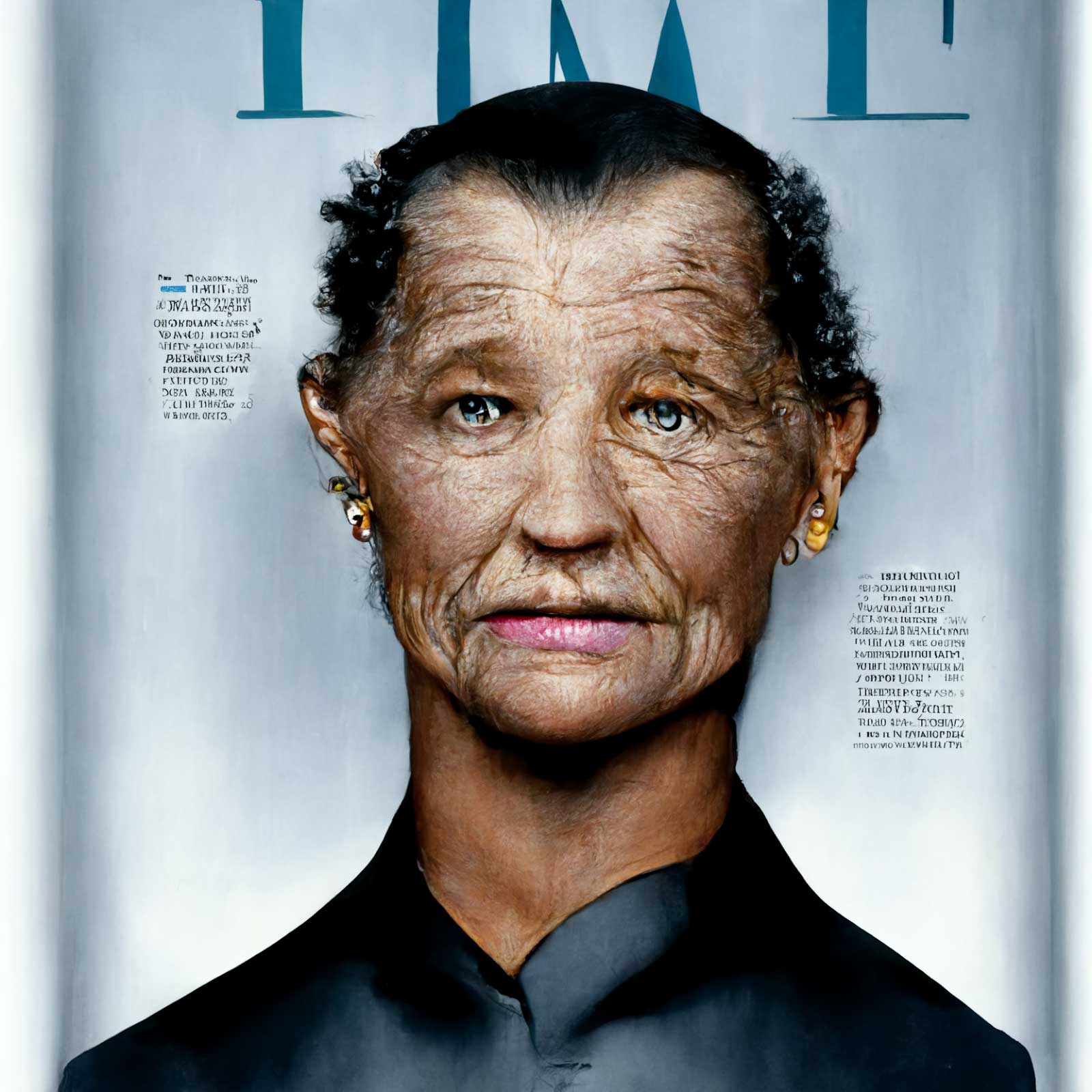 Midjourney gives us this powerful image of a Black Woman. In 2050, it’s nice to see the AI predicting influential Black Women. Given her age in this rendering, she is someone probably in their 30s or 40s today. Any ideas? 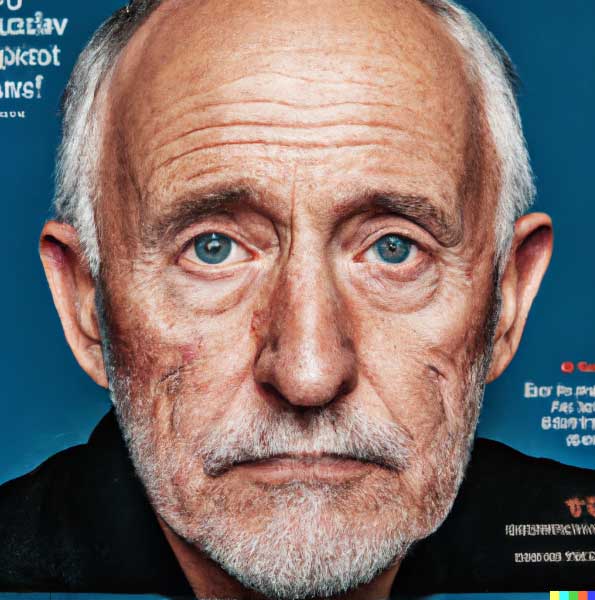 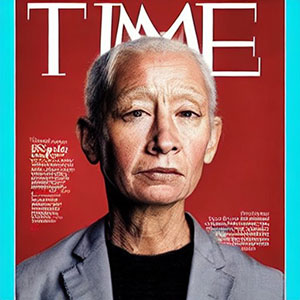 Stable Diffusion gives us an Asian 2050 person of the year. The diversity in the model predictions mirrors diversity in past winners.

Time Magazine’s “2100 Person of the Year” Photo by Martin Schoeller. 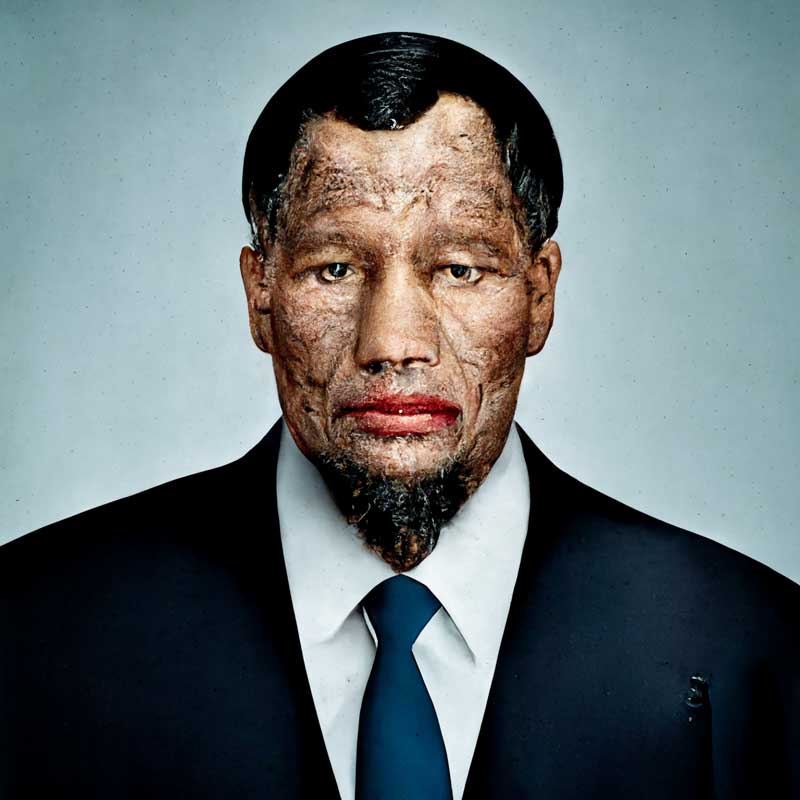 2100’s Person of the Year according to Midjourney is this man. One can only imagine his backstory, with what appear to be burn scars? 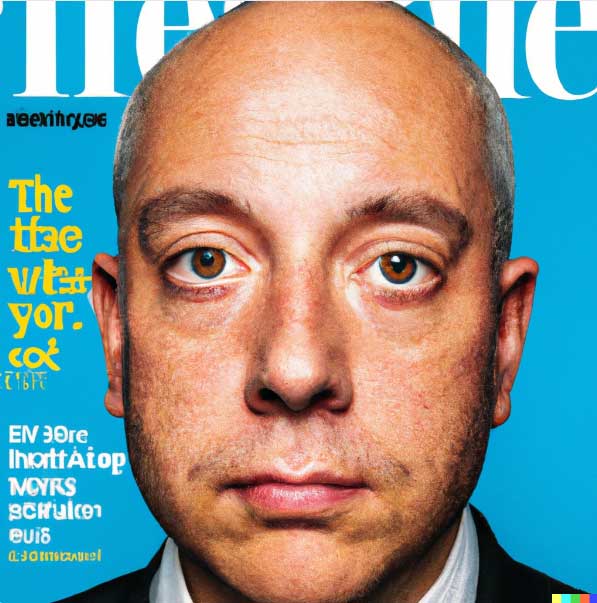 Dalle2 seems to predict a descendent of Jeff Bezos? Feels accurate to us unfortunately. 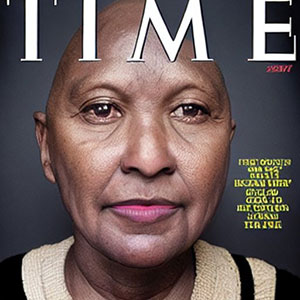 Stable Diffusion again chooses a minority individual as the 2100 person of the year. The text on the right might provide more clues on who this could be.

Should I put any Stock in these Predictions?

Absolutely not. This was an exploration done just for fun. There’s no reason to believe any modern AI has predictive powers of this type, or that predicting things like this is even possible in practice. What it can tell us, however, is about the biases that exist within the models. Take for example the prevalence of elderly white males just in this small experiment. Or the grotesque appearance of the presumably black figures, the AI-powered digital blackface equivalent of minstrel shows. Gender and in particular, racial biases in the data are magnified, offering illuminating glimpses into disturbing truths about public perceptions and practices.

The images above were generated using Midjourney and Dalle2. Experimentation was done to find appropriate text prompts, but once the prompt was dialed in to return photorealistic-ish faces, each image is the first rendering from either model, and not cherry picked.