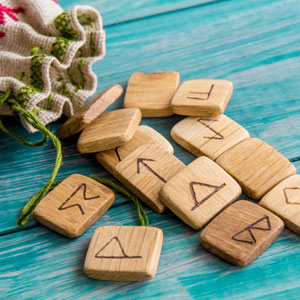 There are many ways to read the runes.

When reading runes, the best method is whatever resonates most with you. There are many ways to read runes. Most people today read runes the same way they read cards, using layouts. This is generally because that's what they're used to. Traditionally runes were read using what's called a full cast. Sometimes a single rune would be pulled to give a general overall picture.
It's the caster's preference to only read the face up runes or all of them. The runes can be read in an “all upright” positioning, with “reversals”, or as they lay. It is always best to read runes by feel rather than a set definition. This is important because runes contain both positive and negative possibilities in the same rune.
At times a rune will “change meaning” for a specific reading because the set doesn't contain one with the “correct” meaning. Sometimes the reading itself needs more than one rune with the same (or similar) meaning because there can be multiple paths with the same (or similar) event. Open ended questions work best because runes are meant to show paths and possibilities, normally in relation to the person's current one.
Rune Layouts
When doing layouts most people will focus on the question as they mix the runes. Then pull out the runes and place them in the position called for in the layout. Some people mix between each pull and some don't. The same layouts used for oracle or tarot card readings can be used for runes or you can create your own.
The Single Pull
A single rune pull is normally used to find out a general tone or dynamic. Such as “What is the overall tone likely to be for today?” You focus on your question, mix the runes, and then pull the rune that feels right. For most it feels like it almost sticks to your fingers, truly making a connection with you.
A Full Cast
A full cast is where your focus on the question while mixing the runes and then cast (toss, drop, etc.) all the runes onto whatever surface you're reading them on. The runes are then read as they lay, with their own meaning as well as how they lay in conjunction with each other. This method tends to be the most comprehensive, most clearly shows the dynamics involved, and if there are multiple possible paths.
Normally the runes will be read from closest to farthest from the caster. This is also typically the chronological progression of events. Many prefer using a full cast because they believe it provides the clearest view since it's not being forced into a pattern or through a filter it may not resonate with.
But it's always best to do what resonates with you. This allows you to pick up instinctively what the message is. When you're reading for another it's even more important because the reading may make absolutely no sense to you, but perfect sense to your client.