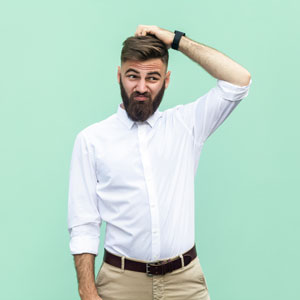 Avoid confusion by learning how to read someone's body language

A commonly referenced research study says that up to 55 percent of face-to-face communication involves body language. Being able to read body language can help you in most scenarios, whether in a job interview or on a date. You can phone a psychic to decipher the meaning behind a conversation, and you can also keep an eye out for some of the common clues to look for.

Unless you've spent years practicing your poker face, your facial expressions are probably giving away much of your thoughts and opinions during conversations. One raised eyebrow may indicate you question or are not convinced by what someone says. Both eyebrows raised along with a nod of the head may show you agree with a view you never considered before. A deep stern frown may indicate confusion, disapproval, or silent disagreement with what is said.

Women, in particular, tend to cross their legs out of habit. Often this means nothing and is just someone's preferred posture. However, in other instances, crossed arms and legs indicate a closed and guarded individual. The person may be friendly and polite but is keeping you at a distance. On the other hand, a relaxed posture with open arms, a forward lean, and hand gestures with open palms show interest, engagement, and openness.

Figuring out if someone is lying is easy if you know what to look for. Fidgeting, darting eyes and excessive blinking are signs some is lying. Some liars try to deceive by doing the opposite — trying too hard not to fidget. This results in stiffened body posture, a pursed lip, and intense eye contact. They're trying to not give themselves away by being too still. Both types of body language are unnatural and a dead giveaway. However, if you're still unsure, a clairvoyant can sense hidden truths behind a person or situation.

If someone has perfected it, you may miss the signs of a fake smile. However, take note of their eyes. A genuine smile always reaches the eyes. You'll see a person's eyes narrow as the orbicularis oculi muscle contracts, squeezing the eyes closer together. If someone has laughter lines around their eyes, these will wrinkle. Picture George Clooney's broad and infectious smile — with smiling eyes and crow's feet. Fake smilers don't smile with their eyes.

Body mirroring is a fascinating phenomenon. For instance, someone yawns and in seconds, you yawn. On a deeper level, body mirroring is a subconscious response to people we like or immediately bond with. Without knowing it, people who click start adopting similar mannerisms, tone of voice, or gestures. It's a great sign on a date. If you notice someone is copying your movements, take it as a sign they like, accept, and trust you.

Interestingly, women tend to be better at reading body language than men. However, anyone can learn how the body indirectly and sometimes automatically reacts in certain situations. Once you understand body language, you'll easily be able to pick up on the clues.